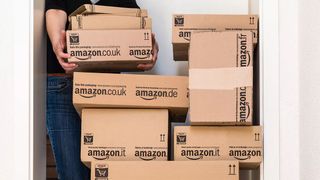 If you're at all interested in tech, or saving cash while shopping, or both, then you need to be ready for the Black Friday rush – expect a weekend (and more) of major discounts, deals, and special offers, which we're going to guide you through as best as we can.

Part of being ready for Black Friday 2019 is knowing what happened during Black Friday 2018: it means you're going to be better able to spot the best Black Friday deals when they appear, and it'll give you a better idea of what to expect on the big day this time around.

We're going to focus specifically on one of the biggest players in any Black Friday sales extravaganza: Amazon. The retail giant is bound to be knocking prices down all across its various product categories, and you might well want to be first in the queue for some of it.

Read on as we break down the best Amazon Black Friday deals from this time last year, and what it might mean for 2019. Remember it's never too early to start shopping either – discounts will likely be running before Black Friday and through until Cyber Monday.

In fact, it kicked off a week early, starting its Black Friday sales on Friday, 16 November. If it follows the same pattern again this time around, then you'll be able to start taking advantage of some fairly hefty discounts from November 22nd – get it marked in your diary and have your credit and debit cards at the ready.

As for the products on sale, Echo devices were front and center, as you would expect – the Echo Dot was half price at one stage in proceedings. We also saw significant price cuts on the Fire TV line of products that Amazon develops (the 4K Fire TV stick was cut by about a quarter of its list price), as well as on kit from brands that it owns, like Ring.

Laptops featured heavily in Amazon's Black Friday sales last year, running both Windows and Chrome OS. We also saw some very decent console bundles go up for sale, covering the PlayStation 4 consoles from Sony, the Xbox One consoles from Microsoft, and of course the Nintendo Switch.

Other tech deals were offered on 4K TVs (from manufacturers including Samsung and LG), on digital cameras, and on smart home equipment including Philips Hue smart lighting packages. Last year Amazon said the Black Friday weekend broke all previous records, so it's obviously going to want to follow the same successful strategy this year.

Bluetooth speakers, smartphones, wireless headphones, smartwatches, fitness trackers, and more... you name it, Amazon was discounting it last year as part of the mammoth Black Friday and Cyber Monday sales event. With the 2019 edition just around the corner, it's worth considering what we might see this year.

As last year, Amazon is going to save its tastiest Black Friday 2019 deals for its own products – think the Amazon Echo, the Fire TV Cube, the Ring cameras, and the dozens upon dozens of products that it now makes with Alexa built in.

Don't forget those ultra-cheap Fire tablets, either – if history is to be our guide then Amazon may well find a way to shave off even more from their prices in honour of Black Friday and Cyber Monday. Add to that the Kindle ereaders, including the newest Kindle Oasis and the ever-popular Kindle Paperwhite.

Apart from kit that Amazon makes itself (or that's made by an Amazon-owned brand), we think it'll follow the lead it set in 2018 by sticking to the same sorts of gadgets for its Black Friday sales – games consoles (especially with the next generation around the corner), smartphones, 4K TVs, and smart home gear.

As last year, you'll get access to the best deals soonest if you're an Amazon Prime member: watch out for the Lightning Deals that only last a certain amount of time this Black Friday and Cyber Monday.

Timing is again important, with Black Friday following Thanksgiving every year – with brand new iPhones and Google Pixel phones on the market, look out for the older models to get a price drop. The same might be true of the Samsung Galaxy phones being sold through Amazon, with the Galaxy S11 approaching.

Whether you're after a dash cam or a pet cam, or any other piece of tech, keep your browser locked to our Black Friday deals page here on TechRadar: we may not be able to predict what Amazon is going to do with 100% certainty, but we do know we'll be able to bring you the best deals as they appear.