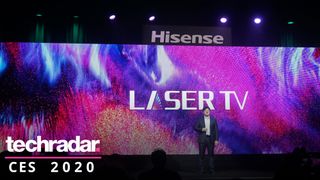 For those of us at CES 2020, the Hisense press conference was certainly confident. With new high-end models of laser TVs and dual-cell LCDs, and bold comparisons between smart home connectivity and actual superpowers, it’s clear this is an electronics company not afraid to shout about its vision for the future of the home quite loudly.

The stats do back up Hisense’s ambition: the company now ranks fifth in the US for overall TV sales, and is the fastest-growing TV brand. The question of laser TVs, though, does give us reason to pause.

Much of Hisense’s message this year was regarding the potential for laser TVs, which are a kind of television / projector hybrid designed to keep the benefits of both – but which as a result will cost you more than both technologies combined.

What are the benefits? Well, you get the vivid colors of a high-end projector, with Hisense’s TriChroma laser technology achieving 100% of the BT.2020 (or Rec.2020) color spectrum, which is more than most high-end televisions can claim.

On top of that, though, you get built-in speakers, a TV tuner, and a capable smart TV platform (most projectors are quite lacking in this department) with the kind of interface most TV owners will be comfortable with already. Throwing in a panel to project onto, too, means you don’t have to make do with a bumpy, off-color living room wall that wasn’t intended to display cinematic images.

The question is, if this technology is here to stay, when are people going to start being able to afford it?

It’s all coming up... lasers

Hisense’s official line is that laser TVs are the future of home entertainment, calling it a “more natural way for human eyes” to watch TV, with reduced amounts of red light to contend with, alongside greater energy efficiency – with reportedly 40% less energy consumption than LCD sets of the same size.

“We firmly believe laser display will dominate in the future,” we’re told – which is a bold thing to claim when so few people are still using the technology.

Sales of laser TVs grew 107% in China in 2019, making it the fastest-growing TV category in the country – though it’s always easier to increase a small number of sales than a large one, and there just isn't the sample size or mass market penetration to really see where laser TVs are going.

There’s plenty of cheaper Hisense TVs to reckon with, of course – with its premium ULED TVs, mid-range Roku sets, and budget LCDs below that – but as long as Hisense pushes its laser TVs as the pinnacle of what it can achieve in home entertainment, at a corresponding price point, it looks like it won’t be within reach of the rest of us for a long while yet.