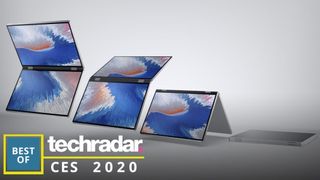 CES 2020 has once again seen some of the biggest names in the tech world congregate in Las Vegas to show off their upcoming wares, with leading laptop manufacturers giving us a glimpse of the exciting new devices arriving in 2020 (and beyond).

This year's show has offered a bumper crop of exciting and innovative new laptops from the likes of Dell, HP and Lenovo, with several brands producing new spins on the tried and tested form factor that's remained largely unchanged for the past 40 years.

If anything, CES 2020 has shown us that there's plenty of life in the old laptop yet, and this year could be incredibly exciting, with faster, lighter and longer-lasting machines that offer some genuinely exciting new features.

While we've seen a lot of great laptops that are rewriting the rulebook at CES 2020, the best laptop on show, in our view, is a laptop that doesn't do anything too revolutionary, but instead refines the current best laptop in the world to produce an almost perfect device.

We're talking about the Dell XPS 13 (2020). Dell has once again produced a stunningly-designed laptop that's thin, light, solidly-built and packed with some of the latest mobile tech in the world right now.

Even in our short time with the XPS 13, we can tell that this is going to be a stunning laptop that could once again top our best laptops list.

Asus was out in force at CES 2020, and amongst a whole load of laptop announcements, one stood out: the Asus Zephyrus G14, which the company claims is the "world’s fastest 14-inch gaming laptop".

It features an impressively thin and light design that we've come to expect from Asus' Zephyrus lineup of gaming laptops, as well as a unique AniMe Matrix display on the laptop lid of certain models. This uses a matrix of 1,215 mini LEDs which can display graphics such as animated GIFs or messages.

You can use this display to show visualizations that change with the music you play, or it could show battery levels and notifications in the future as well.

Asus is also packing some serious firepower into its slimline chassis, powered by up to a Ryzen 7 4800HS with eight cores and 16-threads. That’s partnered with up to an Nvidia GeForce RTX 2060 graphics card (boasting 6GB of video RAM).

On the memory front, Asus provides up to 16GB of 3200MHz DDR4 RAM, and storage comes in the form of an M.2 NVMe PCIe SSD of up to 1TB capacity.

We're sure that when it's released, the Asus Zephyrus G14 will appear high up on our best gaming laptops list.

The Lenovo ThinkPad X1 Fold is one of the more interesting laptops we saw at CES 2020, as it's the first ever foldable laptop, and could potentially usher in a wave of foldable devices that change the way we interact with our computers.

While the Lenovo ThinkPad X1 Fold didn't debut at CES 2020 – we saw an earlier prototype in 2019 – Lenovo provided more details about the device.

The good news is that this could be a genuinely revolutionary product, with a single 13.3-inch 4:3 OLED display that can be used as a tablet, then folded in half to be used like a traditional laptop. It should hopefully avoid the problems that the Samsung Galaxy Fold foldable smartphone encountered last year, and will launch later in 2020.

This means it'll have its work cut out to convince potential purchasers that the new form factor is worth the extra cost, rather than just being a gimmick.

Still, on potential alone, the Lenovo ThinkPad X1 Fold is easily one of the best laptops we saw at CES 2020.

Dell is responsible for another entry in our list of the best laptops of CES 2020, but this time with a device that may never become available.

While this might not make it quite as eye-catching as the ThinkPad X1 Fold, which is just a single foldable screen, the dual-screen design of the Dell Concept Duet is a more sensible compromise, as it avoid the need to fold and potentially crease a delicate touchscreen, something which lead to various issues with the Samsung Galaxy Fold.

It's an exciting glimpse of the future of laptops, but the Dell Concept Duet is unlikely to ever reach the market. However, it's a proof of concept which Dell can use in its future laptops, and it's an encouraging sign that companies like Dell are looking at ways to revolutionize laptop design.

The MSI GE66 Raider is another brilliant laptop shown off at CES 2020, which builds on what came before to produce an amazing machine that wouldn't have been possible a few years ago.

With a bright and brash design (including the MSI GE66 Raider Dragonshield Edition, which features artwork from Hollywood concept artist Colie Wertz), the MSI GE66 Raider is an eye-catching laptop, but it's what's on the inside that really impresses.

First off, it can be configured with a 15.6-inch screen that has an incredibly high 300Hz refresh rate, allowing for amazingly smooth and responsive gameplay.

It also packs a 99.9Whr battery, which is the largest capacity allowed on flights. This should hopefully mean that the MSI GE66 Raider isn't plagued with disappointingly short battery life, as many other gaming laptops are.