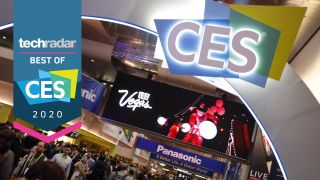 Las Vegas has been awash with tech this week as CES 2020 has taken over the city and seen manufacturers from all over the planet announce new products at its variety of hotels and convention centers.

The TechRadar team has been exploring the halls and press events at CES, and we've  come up with our list of the best tech we've seen this year.

It was a difficult process to pick favorites (literally thousands of companies show off products), but using our expert knowledge of the market we've been able to pick out some true highlights from what we've seen at this year's show.

Below you'll find the official winners of the TechRadar CES 2020 Awards, and a bit of an explainer on why we've given that innovation an award. Note that these are listed in alphabetical order.

That's not a Nintendo Switch you see above - it's the latest concept from Alienware, and it's an idea that aims to put PC gaming in your palms even when you're riding on public transport.

Alienware hasn't specified whether it plans to bring this product to market in future, but it's a fascinating innovation from the company. In our hands on review, we even said the Alienware Concept UFO has the opportunity to change the entire PC gaming market.

AMD has had a brilliant 2019, and it seems like 2020 will be a fantastic year for the company as well, with AMD showing off its Ryzen 4000 series of mobile processors at CES 2020.

We are particularly excited about the performance benefits AMD is promising with its new lineup, which could see loads of new laptops come out that are thin, light and powerful. Some of the most exciting laptops we've seen at CES 2020, such as the Asus Zephyrus G14, are going to be rocking AMD's new chip. Intel's dominance in the laptop market could be under serious threat.

Bluetooth isn't a technology owned by a specific company. The Bluetooth Special Interest Group standardizes the technology, and that organization has just unveiled its next iteration of the standard. It has a rather boring name of Bluetooth LE Audio, but it may one day change your headphones.

According to the authority, the upgrade with LE Audio will allow for improved sound quality and improved battery life. This may not be something you can specifically buy, but once it's available on a new set of headphones or a portable speaker you will appreciate this innovation.

The Nikon D780 might be a more realistic DSLR for most of us, but the 1DX Mark III pipped it to our CES 2020 award for two reasons: it’s a genuine leap forward for Canon, and gives us a glimpse of where its cameras are headed next.

The 1DX Mark III packs in some incredibly powerful shooting features for pro sports photographers (20fps burst shooting, virtually unlimited buffer) with some exciting innovations for the rest of us, including the Smart Controller, ‘deep learning’ autofocus and HEIF support. It might just be the first star of the Tokyo 2020 Olympics.

The Dell XPS 13 has constantly topped our best laptop list over the years, and this year's model, which we got time with at CES 2020, looks set to continue that fine legacy.

Once again, Dell has created a gorgeously-designed laptop with top-notch build quality. The keyboard is comfy to type on, and its screen is to die for, with up to 4K resolution and minuscule bezels. Dell is also promising 19 hours of battery life from a single charge. The best laptop in the world just got better.

This soundbar from JBL isn't an entirely new concept. It has two true wireless speakers that are battery powered so you can disconnect them and place anywhere you wish when you want to get surround sound. We've seen JBL do that since 2017, but this is the first time we've seen Dolby Atmos included.

The detachable rears are what makes this unique when compared to other home cinema offerings. Don't want to run wires down your walls to get your speakers setup? This may be how you're able to experience great audio.

Perhaps the strangest entry on this list is the Samsung Bot Chef that made a salad for one of our editors while they were touring the floor at CES. You'll see above that it features two robot arms that can rummage through cabinets and pour ingredients into a pan to make your dinner.

The Bot Chef currently knows 35 different types of recipe (these are currently just restricted to salads) which is all possible through AI technologies and computer vision algorithms.

CES is known for its TV announcements, but in 2020 there's only one on this list of the best tech at the show. It's the latest top end TV from Samsung and it's called the Q950TS 8K AI QLED.

It has a nearly invisible bezel, impressively high peak brightness and the contrast is great on this TV too. There's also an innovative new speaker system that should beat a lot of the competition from other manufacturers.