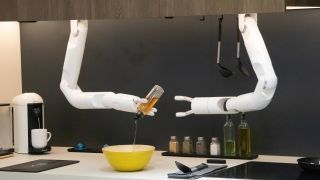 The Samsung CES 2020 booth is chock full of gadgets, but the best thing that we saw there was Bot Chef, a pair of robotic arms that cooked us a salad on command.

Samsung Bot Chef is proof that the company is taking the arms race to get robots into your budding smart home very literally at CES 2020. I was able to watch Bot Chef rummage through cabinets, pour ingredients into a pan, and mix them up to create a tofu salad, using AI and computer vision algorithms.

The sesame tofu salad that Bot Chef made in the kitchen alcove at the Samsung CES booth is one of 35 salad recipes it's programmed to whip up. Greek salad, chicken avocado salad, and walnut apple salad sound like even more of a challenge for what the company calls its gourmet collaborative robot, or 'cobot.'

Sure, it had an aproned human assistant prep dishes of cabbage and spices, then cut carrots and bell peppers, but the robot arms did the heavy lifting – adding oil, sorting ingredients and doing the pouring calculations – and that was amazing to witness. The human really didn't need that apron after all.

The Bot Chef demo at the Samsung CES booth began with a simple voice command: "Hey, Bot Chef, let's make a salad." Tofu was chosen over something like chicken, as there's a decidedly strict 'no fire' rule at the Las Vegas Convention Center. Okay, that's fair.

The two white robot arms hung at attention from a set of kitchen cabinets, like an under-the-cabinet can opener redesigned for 2020. Bot Chef has six degrees of freedom, four main arm joints, and three fingers to pinch and hold various kitchen utensils. Its diameter and reach is meant to mimic that of human arms.

Once it knew which salad we were hungry to eat (within the CES safety guidelines), a kitchen screen detailed the next steps. There were separate tasks for the left arm, right arm, and human chef, all while the robot voice walked the human chef through the recipe.

Too often, with today's voice assistants, it's the other way around: we have to do all  the talking with somewhat specific commands. Not only is Bot Chef the one serving up the steps it knows today, it can download new skills as time goes on.

When it learned a new skill on-the-fly

All of a sudden, Bot Chef began interacting with a traditional coffee machine on the kitchen countertop – one of the perks of Bot Chef is that it's able to learn how to manipulate everyday appliances that aren't traditionally considered 'smart'.

When it picked up a knife and opened a cabinet

Bot Chef was in the middle of cubing the long slab of tofu using a sharp cutting tool, and this was, of course, the opportune time for the human chef to test its safety protocols. It slowed down and then stopped its dicing when he got too close, and the Bot Chef employed a friendly buzzer sound to denote that something was amiss.

So, yes, Bot Chef can pick up knives and cut food, but no, its safety mechanisms won't lead to stabbing accidents – or intentional incidents for that matter: our robotic co-chef isn't programmed to seek complete kitchen dominance, says Samsung.

What it can do, and which left the CES crowd astounded, was reach up to open one of the overhead kitchen cabinets. The human chef changed up the recipe midway through the process – apparently our sesame tofu salad needed a little kick.

Amazingly, Samsung Bot Chef was able to maneuver more than 180 degrees above its mount to snag a bottle of Sriracha hot sauce from the closed cabinet. Its fingers are finely tuned enough to know the difference between just picking up a bottle and squeezing it – and best of all, it put the bottle back when it was done and closed the cabinet door.

How much will Samsung Bot Chef cost?

Our No. 1 question about Bot Chef is "How much will it cost?" We didn't get a specific answer, but it won't be entirely unapproachable, according to Samsung's part-time human chef / full-time spokesperson.

"In order for this technology to really make an impact in our everyday lives, it needs to be affordable," he said, explaining that Bot Chef's maximum payloads should be enough for it to handle full bottles of olive oil and other everyday kitchen items. This isn't meant for industrial lifting, and that should keep the price down.

"That's why we've engineered these robots from the ground up, using custom gearboxes and electronics that will help their price tag read more like a kitchen appliance than a luxury car," Bot Chef's assistant added.

One could justifiably argue that the real cost of robot chef technology like this will be in human chef careers. But the natural counterargument is that it'll free-up chefs from a bunch of menial tasks so that they can focus on the creative aspects of the cooking process – and, like self-driving cars that still require a human behind the steering wheel, at least for now, this robot chef is dependent on a human a co-chef.

In many ways Bot Chef felt like the most futuristic technology on show at the Samsung CES 2020 booth, despite being situated among the company's screen-based 5G phones, 8K QLED TVs, giant Wall TVs and rotating Sero displays.

There's something refreshing about a tech product in which the screen isn't the lead story, and the primary mission of which is to offer humanity, quite literally, a helping hand. The rest of Samsung CES booth is mesmerizing, but this demo is genuinely thought-provoking.