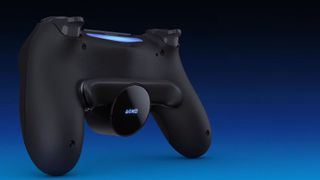 Sony has announced it is releasing a back button attachment for its DualShock 4 controller that will allow players to add two customizable buttons to the PS4 gamepad.

The DualShock 4 Back Button Attachment is aimed at "gamers of all skill levels who enjoy playing competitively". The customizable device can be attached to the back of your DualShock 4 controller and adds two programmable back buttons that can be mapped to to 16 different actions, such as triangle, R1, R2, and so on.

Check out Sony's announcement trailer below:

The Back Button Attachment (that's its official name) slots into the bottom of your DualShock 4 and features an integrated OLED display to allow you to programme the customizable buttons easily. In addition, there will be a button which allows you to quickly remap these back buttons.

You'll be able to save up to three different button profiles on the device and there is also a headset pass-through, so you can still connect your headset to the controller.

Sony has stated that the Back Button Attachment will work with "all of your favorite PlayStation 4 and PlayStation VR titles", which doesn't actually specify if it'll work with all titles or not. It could be just a select few 'favorites'.

While Sony has endorsed various third party 'pro' gaming controllers, this is the first time the company has released something close to a customizable pro controller of its own. Creating an attachment for the current DualShock 4 means that players don't need to shell out for a new, more premium controller.

While the Xbox Elite Wireless Controller Series 2 is a fantastic controller, and boasts plenty of customization options, its over $100 price tag means it's not the best fit for all players.

The Back Button Attachment launches in US and Canada on January 23, 2020, for $29.99 USD. Pricing for the UK and Australia has not been announced and it's currently unconfirmed when the attachment will launch in these regions.