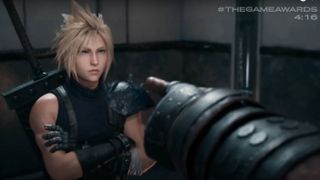 We already know that Final Fantasy VII Remake is coming in just a few months, but we just got a new trailer at the 2019 Game Awards that shows off a ton of action.

The trailer essentially consists of pieces of combat, along with some sparse pieces of dialog from the biggest characters in the story, like Cloud, Tifa, Aerith and Barrett.

One thing that we didn't quite see, however, is how the game's Midgar section will be stretched out to be as long as any other Final Fantasy game. We did hear Tifa ask Cloud if he's planning on staying in Midgar – but who knows if that will actually be reflected in the game.

This is just another in a long list of extremely exciting trailers for one of the most anticipated game remakes in history. Final Fantasy VII Remake drops on March 3 2020, so there's only a couple months left until we see how it shapes out. Until then, we'll just have to keep an eye out for any new trailers to extract any new tidbits of information about the game.