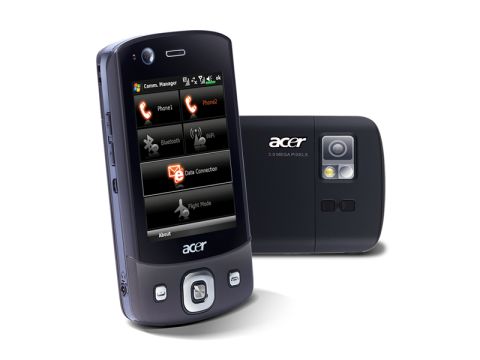 With the ability to accomodate two SIM cards, the Acer DX900 is perfect for those leading a double life

Computer giant Acer has made a strong move into the smart phone market after acquiring Taiwanese manufacturer E-Ten last year. Remember those non-search engine friendly Glofiish smart phones? That was them.

Now Acer has a whole range of Windows Mobile smart phones lined up (many of them not a whole lot different from their Glofiish counterparts), with a range that reads like the line-up of a new girl group: there's the X900 (small and stylish – cute Acer), M900 (with QWERTY keyboard – smart Acer), and DX650 (touch screen on one side, keypad on the other – weird Acer).

But first onto the stage we have the Acer DX900, which, with its dual SIM capability offering the all-too rare ability to use two different SIM cards in one phone, could probably be classed as schizoid Acer. Mind you, with 2.8in touch screen, 3.0 megapixel camera, GPS, Wi-Fi and HSDPA 3G, it's a pretty high-functioning dual personality.

If Acer's smart phones really were a girl group, they'd be sorely lacking in a key attribute demanded by today's pop pickers. They've all had a passing slap with the ugly stick and the DX900 in particular looks like it has taken quite a beating.

The square-edged dark grey and black plastic casing could be generously described as 'functional' and its bulky dimensions (106x61x17mm and 147g) mean it can't even hide easily in a pocket.

Above the 2.8in touch screen is a VGA camera for video calls and a speaker, below it are basic call start and stop keys flanking a five-way D-pad.

Around the sides are volume keys, a programmable smart key, 2.5mm headphone jack (why? WHY? – when 3.5mm is the most common mini jack port on the planet?), microSDHC memory card slot (none supplied), camera shutter button, power button, hard reset access hole, stylus slot and a mini USB 2.0 power port on the bottom.

Around the back are the 3.0 megapixel camera lens, with LED flash and self-portrait mirror, plus dual loudspeaker ports.

The microSDHC slot cover on our sample never seemed to close properly, but we'd like to think that's a one-off. The stylus is a nicely robust one, telescopic, so it fits neatly into its slot, and made of metal with a plastic tip. These things matter.

Next Page Screen and interface