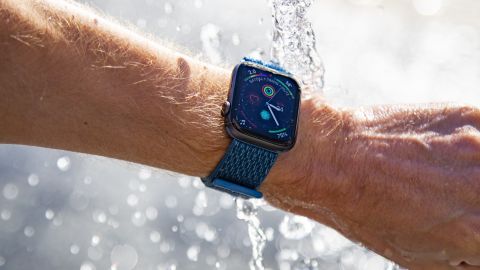 Apple clearly believes smartwatches are here to stay - the Watch 4 utterly proves that. The design alone is a big upgrade, with the screen offering far more visibility, and while the health benefits are only going to help a subset of users, they're welcome and show the direction Apple is heading. If it had better battery life, and thus was better able to track sleep, the Watch 4 could have been the perfect smartwatch.

The Apple Watch 4 is still a robust smartwatch, with an upgraded design and display along with a new ECG sensor to track a user's heart rate, making one of the most desired timepieces in the world even more desirable.

The larger screen and more rounded edges are much nicer to look at and offer more functionality, and it also adds in some extra features too that are designed for those who are a little more vulnerable or suffer certain health conditions.

When it was released, the Apple Watch 4 was one of (if not the) best smartwatch around.

But now that the Apple Watch 5 has been introduced alongside the iPhone 11, you might wonder which is most suitable for you. You can check out our Apple Watch 5 vs Apple Watch 4 comparison piece to decide for yourself.

Still, the Apple Watch 4 is one of the more expensive and popular smartwatches - so what does the smartwatch bring and is it right for you?

The Apple Watch 4 is available in four variants: 40mm and 44mm sizes, and with or without LTE.

In terms of the Apple Watch 4 release date, you can buy it now in almost every country around the world. It came out in September 2018 on the same day as the iPhone XS and iPhone XS Max. Keep in mind that Apple no longer sells the Apple Watch 4 through its online storefront, but you can still pick it up elsewhere online.

If you’re in the UK, EE offers deals for the LTE version of the watch as it did for the Apple Watch 3, and now both Vodafone and O2 have joined the party by offering a data connection too. Those in Australia can find it on Optus, Telstra and Vodafone.

All of these networks and carriers offer a variety of deals so you can get the watch with airtime included. Be sure to take a look at our selection of the best Apple Watch 4 deals before you buy.

The Apple Watch 4's key feature is really its design - we say that because while the extra health benefits are something that are worthy and really make this an attractive device for those in need of them, the pool of people this is relevant to is smaller than just those looking for a new watch.

Another major upgrade is the electro-cardiogram feature (ECG) that has so far only been enabled in select countries, including the US and the UK.

We've yet to test it out ourselves - we hope to soon - however, we were able to see it in action during our demonstration from Apple, where you need to activate the app on the phone and then hold the Digital Crown down to complete the electrical circuit in your body.

This spits out a set of data from the ECG to your Health app on the iPhone, which can be exported as a PDF and give information on rhythm to a physician, plus you're able to write notes to contextualize what was happening at the same time.

The other thing we weren't able to really test was the new fall detection, as you have to go down a certain way and remain there for a while to activate the feature.

We did try to fall, but it was getting a little embarrassing and perhaps we need to commit harder to the testing - we'll update the review if we get braver in the coming months.

However, one thing that did worry us a little about this feature is battery life - while it's great to see that fall detection exists, and will be set up automatically for those over 65, the fact that you really need to charge the Watch once a day is going to be harder to remember for some users and that could mean their safety blanket (or for those that bought the Watch 4 in the first place to safeguard a loved one) is redundant if the Watch has no power.

There's also a set of heart rate notifications, including one that's looking out for atrial fibrillation (AF), meaning you'll get a pop-up if there's anything that looks sketchy with your heart with regards to this condition, which could lead to life-threatening complications.

The Watch 4 also comes with an alert system if your heart rate goes too low or high: should your heart rate spike or fall hard for no reason for a long enough period (around 10 minutes) you'll get an alert telling you all is not well, and maybe you should see a physician.

We have a rather low heart rate from regular running training, and the update did ping in from time to time to reference to us that the heart rate testing was working.

The other key upgrades beyond the design, which we'll get onto in a minute, are more hidden in the heart of the Apple Watch 4 - there are sweet touches like a (virtually) clicking Digital Crown that feels like it's clocking through lists on the wrist. It even makes a slight noise, and the whole system is incredibly pleasing.