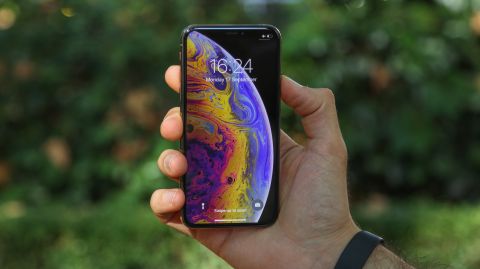 Compared to the iPhone X, the speakers on the iPhone XS are more powerful and 'wider' in sound, the camera has been enhanced with Smart HDR, the battery management is better and the chipset is far more powerful inside. These are all just tweaks though, and it was smart from Apple to remove the iPhone X from sale, as that would have been a far more attractive option prior to the launch of the iPhone 11 range.

This is the iPhone XS – pronounced ‘10-S’, not ‘excess’ as you might think. It looks identical to 2017's iPhone X, and you might think that not a lot has changed – but it’s inside where the differences lie.

This is a weird situation for a review; usually, when looking at an ‘S’ variant of an iPhone we’re asking the question of whether it’s better than the now-cheaper model from the previous year.

In 2019, however, Apple made the choice to discontinue the iPhone XS to make way for the iPhone 11, iPhone 11 Pro (which is its direct successor) and iPhone 11 Pro Max. So while we can draw comparisons they won’t help you make an informed choice unless you pick up an iPhone XS from a third party - which will be cheaper than one of the new flagships.

The devices change over time, too, thanks to software updates. The iPhone XS package is about to get a lot more tempting now that iOS 13 is landing imminently.

Apple's latest operating system, which will be available to the iPhone XS, brings many new features like Dark Mode and a range of app speed increases, so you can make the most of your iPhone experience.

Each three has new and improved specs over the 2018 iPhones, but the latter two are also more expensive.

Alongside the iPhone 11 range announcement, Apple confirmed that it would no longer sell the iPhone XS – it's being dropped from the company's line, but that doesn't mean you can't buy it. Retailers and carriers will still stock it for a while to come, so if this review gets you excited to own it, that's still a possibility.

However, Apple has discontinued the iPhone XS, so you'll have to shop in third-party stores to find it.

The good news is you may be able to find the phone a little cheaper from such stores though. In the UK, our guide will help you find the best iPhone XS deals on contract.

Usually in this section we'd talk about all the new features that the phone brings – but in this case there really aren't that many, with Apple resolutely sticking to the strategy of launching an 'S' phone with little changed other than speed improvements and a few other performance bumps.

That's not to say it isn't impressive, and useful, new hardware in the iPhone XS, but most of the benefits won't be instantly discernible to the average user.

One change that is easy to spot is the new color: the gold variant is more mocha than anything else, with a touch of copper in the shade, and brings another option in addition to the Space Gray and silver options.

We can only surmise that this was possible because the chassis of the iPhone XS is so similar to that of the iPhone X, so it wasn't expensive or time-consuming to alter the process to add in a new hue.

Apple is proudly talking up its new chipset, and with good reason: it's one of the most powerful on a smartphone, created as it was using a 7nm process.

That may not mean much to most people, but essentially it means that more transistors can be chucked onto this hexa-core CPU, which has two 'power' cores and four more that are optimized for efficiency.

However, even those slower cores are still more powerful than any of those found in the iPhone 6, a handset that's only four years old, showing just how rapidly smartphone technology is progressing in terms of power and efficiency.

One might question whether this much power is really needed – and sure, if you're just browsing the web and sending messages it's utterly wasted.

However, if you want to explore the world of augmented reality, then these extra transistors are on hand to help out.

There's also a new 'Neural Engine' in the mix, enabling your phone to become more intelligent, learning as you use it.

It adds a 'smart layer' to proceedings, allowing the handset to recognize things on the screen, whether that's appending an Animoji to your head in real time during a FaceTime call, or working out what's needed to improve the quality of a photo as you're taking it.

It's hard to really quantify the benefit of this improved chipset other than through numbers. Running the iPhone XS through the Geekbench CPU testing process showed that it's the most powerful phones we've ever used: a score of 11,481 is over 1,000 higher than the iPhone X from last year, and better than any phone we've tested.

That speed improvement is easy to feel within the phone, as the iPhone XS is one of the snappiest handsets we've ever tapped our way through.

It's tricky to say how much of this is down to the hardware and how much to the improved iOS 12 software – but either way, it's a really, really rapid experience.

The A12 chipset brings a step up in graphical performance too – gaming is getting ever closer to console-level graphics, and we had the chance to check out a few AR titles too.

That said, we're still not fully convinced about the benefits of AR gaming – it's mildly diverting for a while, but many titles still seem to lack the overall polish that more typical iPhone games bring, such as Elder Scrolls: Blades, where you've got incredible gaming prowess mixed with high-level effects within.

For instance, we played ElemenTao, and not only did it lack any kind of tutorial but it was a bit clunky when we tried to play it on a desk. That's not really the fault of the game, but rarely do we have a large table with nothing on it on which we can play solo titles, or with chums.

Yes, there will be moments when it's cool, but they'll be as rare as deciding to play board games of an evening – so it depends if that’s what you’re into.

It's worth noting that this is no longer Apple's newest mobile chipset, having been bettered by the A13 Bionic in the iPhone 11 range, but it still outmatches most rival ones.