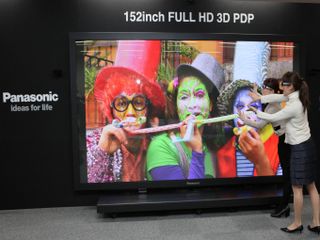 152" TV: good for Scarlett Johansson, not so much for Prime Minister's question time

Panasonic's ultra-wide 152-inch television has proven to be a success for the company, with 31 orders for a television costing over £380,000.

The 50 thousand yen television was unveiled in January last year – and the plasma immediately caught the attention of punters, not least because it must have been hard to see anything else in the room.

According to Asahi.com, 31 orders is not the end of it, with another 300 enquiries across the globe.

The screen is a beastly 3.4 metres wide by 1.8 metres high – so essentially a wall – and is manufactured in Amagasaki.

Although it is mainly businesses that have splashed out for the screen, there is one Middle Eastern billionaire who has forked out some of his hard-drilled oil money for the screen.

For his cash, he does at least get a 3D picture – although for nigh-on 400 grand he could possibly have hired the actors to come around to his house and do a live performance.