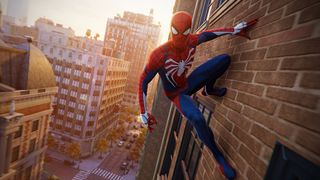 Picture the scene. You're walking through a massive enchanted forest. Lines of trees run on seemingly for miles, birds in the distance cross impossible distances, and there seems to be no end to your adventure in sight – that is, until you hit a loading screen.

As the worlds of today's video games get larger and larger, developers and console makers are having to figure out new ways to keep gameplay feeling like a fluid experience, without having to groan at a 30-second loading screen every time you enter an elevator or open a door (we're looking at you, Fallout).

But a patent from Sony describes a type of loading software designed to stop this from happening.

Sony's patent, 'System and method for dynamically loading game software for smooth game play' – which, at the time of writing, seems to have crashed due to the number of users attempting to read its page – outlines a technology that tracks the player's movement through their environment, loading relevant assets as you move into certain areas.

The patent describes the process as follows:

Technically this patent is a continuation of a previous patent filed in 2012, but with added functions for when a player / character passes the aforesaid "load boundary". Those might be additional events triggered when passing certain points, certain sections of game environments being visible despite not being adjacent areas, or previous areas being loaded again when back-tracking through the boundary.

It seems like a version of the technology used in games like God of War, which famously achieved a continuous camera shot throughout the whole game, without loading screens – or Breath of the Wild, which managed to run a huge open world environment even on the underpowered Nintendo Switch.

Using dynamic ways to load or remove sections of levels, including the kinds of character, creature or enemy assets found there, is going to be increasingly crucial for ensuring an immersive experience that isn't regularly interrupted – ensuring that loading is something that happens dynamically in the background of your games rather than at set points that render the game unable to do anything else.

The PS5 laughs at your load times

While there's no specific mention of the upcoming PS5 console in the patent itself, it's not hard to make a connection. Sony is going to aim for ever bigger games on its upgraded hardware, and we've already seen examples of PlayStation games running with vastly reduced loading times on what will become the PS5 hardware.

With the processing chops to support 8K resolutions and improved VR performance, the PS5 console will be a lot better placed to reduce or remove loading times entirely, and the updated patent seems to show Sony realizing how important this will be to gamers looking for more immersive experiences – no matter how demanding it is on their consoles.