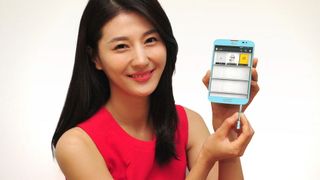 Well, she's happy with it anyway

After unveiling its new animation-friendly cases last week, LG has now given the Vu 3 the official nod with its 4:3 stylings set for release by 27 September.

Not in the UK, US or Australia, mind you - the Vu 3 seems set for a limited release with the company focusing its efforts on its home turf.

So we'll be missing out on the 5.2-inch screen with a 4:3 "textbook" style aspect ratio, which LG describes as "monolithic", with a stylus coming as standard.

There's a Qualcomm Snapdragon 800 on board, with LTE 4G connectivity and a 13MP camera rounding out the specs.

We've already seen the see-through QuickView smart cases that display animated notifications when the phone is encased within.

LG's not letting much more slip in its announcement release, however, so we're in the dark as to what version of Android it launches with and other details.