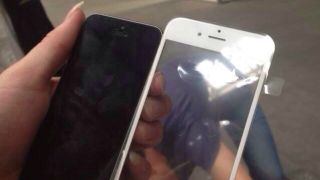 A photo of what seems the be the panel for a larger iPhone has shown up on the web. Could this be the inflated iPhone 6 we've been hearing so much about?

The image was posted on Sina Weibo and shows the larger panel next to an iPhone 5S to help up appreciate the proportional differences.

Yes, it's quite clearly bigger, but there's no guarantee that it's also legitimate - after all, it is that wonderful time of year where the web is filled with fake iPhone 'leaks' vying for our attention.

All the expected holes and markings can be seen on the panel face, although the bezel looks a lot slimmer than that on the 5S.

The internet is awash with rumours that Apple is readying a 4.7-inch iPhone 6 for September, with a 5.5-inch version to follow not long after.

It's difficult to tell by the picture alone but this panel looks a tad bigger than the last allegedly-leaked one we saw, most likely making this the 5.5-incher.

You can also see a box containing more of the panels in the bottom right of the picture. So if this isn't the real thing, s it looks like someone intends to make a nice little mint from selling some fake Apples.