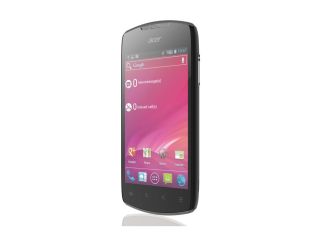 Acer has taken the wrapper off of one of the phones it will be showing off at MWC 2012 – the Acer Liquid Glow.

This Android handset comes with Ice Cream Sandwich straight out of the box, and is set to be one for the budget crowd.

When it comes to specs, the Acer Liquid Glow has a 3.7-inch screen, 5MP camera on the rear with LED flash and NFC functionality.

The phone is using NFC in an interesting way, with something called Android Beam technology. Through this app you will be able to share photos, contacts, apps, music and video.

There's no word as of yet what kind of processor the phone is packing but don't expect this to be a powerhouse.

It is available in a number of colour options, though, which sound more like a toilet cleaner options than real colours. These include: Sakura Pink, Alpine White and Cat's-eye black.

Although the Liquid Glow is Android 4.0 from the off, you will have to wait some time for the handset to be in the shops. This is because the Acer Liquid Glow UK release date has been pegged for early summer.

TechRadar is out in Barcelona for MWC in full force so expect a hands on: Acer Liquid Glow review to appear in the coming days.