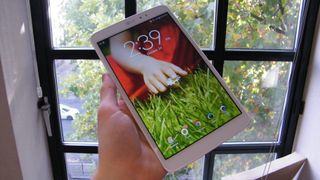 A new G Pad might be on the way

LG isn't a huge name in tablets but with a metal body and a great screen the LG G Pad 8.3 impressed us.

Now we might be getting a successor, as according to Leaksfly on Weibo the LG G Pad 2 is coming in October. The leakster claims that it will have an 8.3-inch screen, just like the original G Pad 8.3, but that the resolution will be upgraded to 1080p.

The innards are also supposedly getting a boost, with a quad-core Snapdragon 805 processor, 3GB of RAM, an 8MP rear camera, a 5MP front-facing one, 32GB of storage and Android 5.1.1.

Not quite a flagship

Those still aren't top end specs but the LG G Pad 8.3 was priced fairly reasonably and we'd expect the LG G Pad 2 will be as well, though there's no word yet on what exactly the price will be.

It's not known where Leaksfly got their information from either and they don't always get things right, but they do have a track record. For example they leaked photos and mostly accurate specs of the HTC One M9 Plus, so while we'd take this with a pinch of salt we wouldn't count it out, especially as the G Pad 8.3 is overdue a refresh.