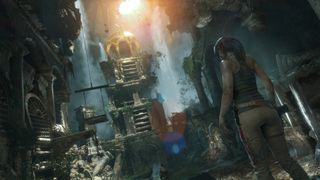 Rise of the Tomb Raider VR

While other folks might go out for a night on the town on their 20th birthday, action heroine Lara Croft is returning to her console birthplace on PlayStation systems to celebrate her big two-oh.

Square Enix announced that it will bring Rise of the Tomb Raider: 20 Year Celebration, an extra-laden version of last year's Xbox One exclusive title, to PS4 on October 11 to coincide with the series' 20th anniversary.

The PS4 version will include the usual innocuous extras like additional story content, a co-op mode and extra outfits and weapons but – more surprisingly – it will also support PlayStation VR, which is slated for launch a mere two days later on October 13.

"This year we celebrate 20 years of the iconic Lara Croft," said Ron Rosenberg, co-Head of Studio at Crystal Dynamics. "This provided the perfect opportunity for us to deliver a new Tomb Raider experience. With the addition of PlayStation VR support, you can play the world through Lara's eyes for the first time in franchise history."

The VR DLC mission, called Blood Ties, allows players to explore the Croft homestead in first-person, all while piecing together unknown bits of the Croft family's past.

Xbox One and PC owners will also have access to Blood Ties, obviously, however PS4 will be the only system to support a virtual reality headset according to Square Enix.