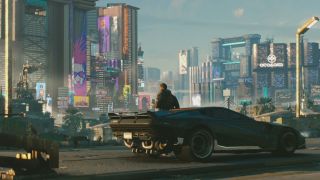 It was inevitable, right? That a game as ambitious as CD Projekt Red's Cyberpunk 2077 could launch with a fully-fleshed out single player mode and a major multiplayer offering seemed mad. And so it – Cyberpunk's multiplayer mode - will be delayed.

And not just by a small amount – it's at least two years away as the company confirms it'll be coming after 2021.

The announcement follows news that the core single player mode, itself initially planned for an April 2020 launch, will now be held back until September 2020 to add some final polish.

The news came during an investor call, in which the developer's SVP of development Michał Nowakowski had this to say:

"Given the expected release of Cyberpunk 2077 in September, and frankly speaking of the series of events we expect to occur after that date, 2021 appears unlikely as a release date for the Cyberpunk multiplayer."

A delay for the sake of the quality of the game is hard to argue against, especially in an industry notorious for 'crunch culture' that sees developers working long hours to ship a game in a good state at a tight deadline. But gamers have had to deal with a long list of delays recently, with the likes of Final Fantasy VII Remake, Marvel's Avengers and The Last of Us: Part 2 all being delayed.

With their release dates now pushing up against the launches of the PS5 and Xbox Series X, all are looking increasingly likely to go cross-generation at this point, with Cyberpunk 2077 in particular looking like a next-gen candidate already.