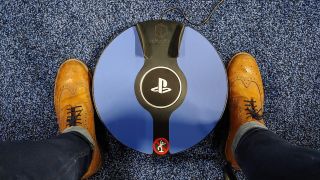 Locomotion has always been a tricky issue when it comes to virtual reality gaming. Ideally, we'd all be running around limitless VR playgrounds, but the reality is more likely that we'll be sat on a sofa in our living rooms, either pushing a control stick to propel us forward or using some sort of in-game teleportation mechanic.

While some have thought that an at-home VR treadmill is the answer, the team at 3DRudder think otherwise. Shown for the first time at CES 2019, they have built a tilting disc for PlayStation VR that you control with your feet, giving you direct motion control over a character as you play.

If it sounds familiar, that may because you've heard the 3DRudder name before – it was first introduced at CES 2017, but was then intended for PC VR players. With the might of the Playstation VR behind it, it could be about to reach a far bigger audience.

The 3DRudder for PS4 is a plug and play device – no set up is needed, you simply pop it into a USB port on your console and start playing. Twist your feet to turn in game, lean left or right to strafe, and tilt the disc forwards or backwards and you'll move in either direction. From a quick play with the system at CES Unveiled, it proved very intuitive indeed.

However, not all games will support the 3DRudder straight out of the gate – developers will have to individually program support for the peripheral into their games.

But the future is already looking bright. The 3DRudder will work with more than 30 games when it launches in April, including new titles The Wizards, Sairento VR and Blind. And most exciting of all? Sony is fully behind the concept, with a host of first-party titles already in development taking advantage of the novel control system.