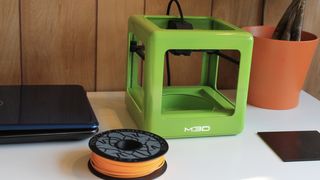 While most gadget fans would confess to a sense of intrigue when it comes to 3D printers, the financial reality of acquiring one has ensured that eventuality remains a distant dream for some ... until now.

The Micro, which its creators at MD3 say is "the first truly consumer 3D printer," is just 7-inches tall and can print items 4.6-inches in size, making it ideal for printing jewellery, figurines and other small objects.

The plug-and-print device will come with its own custom design software, which the firm say is ideal for beginners and experts alike. It also offers auto-levelling and auto-calibration tools.

Filament spools can be snapped up at the pledge stage for US$12 (about AU$12) a pop, making this an entirely affordable endeavour altogether.

At the time of writing, there are around 1,600 left available at $299, which appears to be the RRP for the production version of the device.

Once they run out, Kickstarter backers will only be able to jump on board by chipping in US$599 (about AU$645) or more to secure a 3D printer from the initial batch.