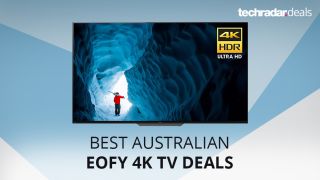 With the end of financial year (EOFY) coming up, you can expect huge discounts on a variety of 4K televisions across a number of Australian retailers, making this June the perfect time to update your telly.

Televisions, more so than most other tech products, tend to receive drastic price drops mere months after release, meaning it's possible to save hundreds (or even thousands) on a relatively new TV's RRP.

Now that the Australian business year is coming to a close, you can expect those prices to come down even further. We predict that this year's EOFY sales are going to be some of the best we've ever seen for 4K HDR televisions!

Still, buying a new television, even a discounted one, is not something to be taken lightly – you will need to drop a fat stack of cash regardless of which TV you end up with. That's why we're here to make sure you're informed on the very best EOFY TV deals that are currently available.

Want to score a great smartphone, laptop or other tech bargain? Take a look at our other EOFY 2019 deals roundups below.

You don't have to wait till June 1 to purchase that 4K TV you've had your eye on. Some retailers have already started listing some incredible discounts on a number of recommended TVs – here are some of the best 4K HDR TV deals we've found so far.

Want Sony's award-winning A8F at far less than its RRP? Vieopro has a terrific deal that offers this amazing 55-inch OLED for only $2,490, which is significantly less than Sony's $3,999 asking price!View Deal

In our Hisense 65P7 review, we stated "If you can get the Hisense 65P7 for less than the asking price, you won't be disappointed with its quality and high-end features." Well, that time has come, as Videopro is offering the ULED TV with ultra local dimming for only $1,185 – substantially less than its original price of $3,299.View Deal

Want an utterly fantastic LG OLED television for under three grand? That's exactly what Bing Lee is currently offering, with LG's 65-inch B8 OLED currently priced at only $2,985 – that's a massive saving on the TV's $4,199 RRP!View Deal

Features to look for in EOFY 4K TV sales

Perhaps the most important aspect to consider when purchasing a new television in 2019 is its display technology. TV manufactures like to throw around numerous acronyms, including OLED, QLED and LED-LCD, and it's important to know the benefits and drawbacks of each.

OLED technology, or organic light-emitting diodes, employs self-lighting pixels that can be controlled individually. That means that individual pixels have the ability to lower in brightness or turn off completely to achieve complete blackness in dark scenes. Of course, due to their organic nature, OLED TVs have been known to suffer from burn-in on some occasions. That said, the technology is generally considered the current high-watermark in display technology.

LED-LCD, while an older technology that requires a physical backlight solution, continues to thrive in all other non-OLED televisions. The addition of actual backlights on LED panels means they're able to achieve much higher levels of brightness than OLED sets, however, they aren't able to achieve true blacks at a pixel-level.

Meanwhile, QLED, despite being at the forefront of TV technology, is actually just a tweaked version of LED-LCD tech that employs a quantum dot filter to bring increased colour volume and brightness to whatever you're watching. That means incredibly vibrant images all round.

Modern televisions all run on smart TV platforms, and for the most part, the operating system you end up with will depend entirely on your chosen manufacturer.

Sony and TCL televisions favour the Android TV platform, which offers access to thousands of apps on the Google Play store. That means video games, video apps like VLC, ROM emulators... you name it.

LG has its own webOS platform which is built around remote pointer navigation, while Samsung's Smart Hub OS is based on Tizen and uses a pop-up menu that lets you cycle through options while your content plays in the background. Hisense also has its own smart TV platform in VIDAA U, which lets users cycle through a ribbon of apps and functions on their home screen. Though all three are quite fast, they are fairly limited in the apps department.

While resolution has been the key factor for many when it comes to watching content at the highest quality possible, HDR or high-dynamic-range is equally important.

HDR brings a wider colour gamut to your content, allowing for more intense and lifelike colours, as well as improved contrast and colour gradations.

Making matters somewhat confusing for consumers, there are competing HDR formats in HDR10+ and Dolby Vision, which both offer their own take on dynamic metadata that aims to adjust your colour and contrast on a scene-by-scene basis.

You can find out more about each HDR format below.