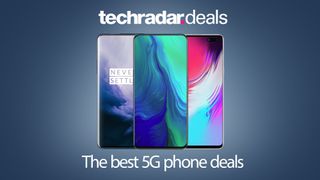 For those wanting the most innovative options when it comes to phones, it's all about 5G - and we're seeing top 5G phone deals already coming to service the need for that next-gen phone use.

What is 5G?, you may silently think? Well, where 4G speeds for your phone meant some pretty quick downloads, 5G is more on the lines of blink and you'll miss it kind of speeds. To be slightly more scientific, 5G is estimated to be roughly 20x faster than 4G, allowing films and albums to be downloaded in seconds.

But like most other new technology, 5G phone deals don't exactly come cheap. Getting hold of these superfast devices requires a bit of investment.

That said, considering you'll be getting the world's greatest phones with speeds faster than most internet connections we must admit that we were expecting slightly higher prices at the start of this connectivity revolution.

Right now, there are only a few 5G phones available, including the likes of the Samsung S10 5G, OnePlus 7 Pro 5G and Xiaomi Mi Mix 3 5G, but as time goes on we'll see more and more 5G phone deals appear.

For those ready to jump start their phone speeds and leave buffering behind, we've listed the most affordable 5G phone deals down below so you can find the one that works for you. But if you can't find an option you like, keep an eye out on this page as we update it with all of the newest 5G options.

It's Samsung's latest offering. And as a clear move forward into the future, all of the S20 range comes with 5G compatibility. Of the three, the middle Samsung Galaxy S20 Plus feels like the best choice blending the specs of the Ultra with the price of the smaller S20.

Taking the brand new, impressive Samsung Galaxy Note 10 Plus and giving it 5G capabilites, Samsung is on to a real winner here. Firstly, its massive - like most of the 5G phones now available.

Secondly, with all of the incredible processing power, stylish screen quality and big battery powering this phone, we can't think of a better way to enjoy your new 5G powered content.

A 5G Phone at an affordable price tag

5G Phone deals are expensive, there's no getting around that. However, Samsung's latest attempt at 5G speeds has resulted in this, the Samsung Galaxy A90 5G. This phone comes in at a surprisingly affordable price while still offering top specs.

The battery is giant at 4500mAh, the cameras are strong, the screen is vibrant and of course, the speeds are blisteringly fast!

With features topping the Galaxy S10 Plus - a phone we've named the best smartphone in the world - the Samsung S10 5G is a powerhouse device. It packs in a colossal battery, a massive screen and obviously, the 5G speeds that makes this stand out from the crowd.

A massive phone with massive qualities

For those wanting a phone bordering on tablet sizing, the Mate 20 X 5G is the only option worth considering. It stacks up at a full screen size of 7.2-inches, making it one of the largest phones on the market.

With that size comes a powerful processor and 4200mAh battery, perfect to power all of that content you'll be consuming with your 5G speeds!

Taking the incredibly impressive OnePlus 7 Pro and shoving in some high-end speeds, this phone sees the Chinese brand taking one of its phones and making it even better. Download films in seconds, upload files instantly and just generally enjoy the ease that 5G speeds allow you.

Xiaomi might not be quite as familiar a name as the options above but it's here to show some competition. While none of the 5G handsets on this list could be considered cheap, the Xiaomi Mi Mix 3 is one of the more affordable options when it comes to 5G.

It packs in a decent 3800mAh battery, an impressive all-screen display and most importantly, a high-end camera too.

A massive battery to power all that 5G magic

If you're sat there thinking 'what is an Oppo and why would I want one?' you're not alone. But Oppo is actually the fourth largest phone manufacturer in the world and the Reno 5G is its best device yet.

Packing in an impressive 10x zoom camera, a pop-up selfie camera, massive processor and powerful all day battery, this is a phone with abilities to compete with the other 5G phones with ease.

This phone has a lot going for it. A giant battery, an impressive multi-function camera and a unique second screen attachment makes this a phone to be excited about. In essence, its a multi media powerhouse.

Combine all of that with its 5G capabilities and the LG V50 Thinq 5G manages to standout from the crowd as the perfect device for taking in mass amounts of media.

When can I expect to get 5G?

As of May 30, 5G speeds on EE are now officially available. For those intending to get their 5G with Vodafone it has now also officially launched, offering a cheaper alternative to EE.

However, 5G won't be available instantly across the UK. It will be trialled across different cities first and then rolled out from there. For those looking to EE for their 5G the range of cities has become quite vast. EE 5G is up and running in Cardiff, Edinburgh, Belfast, Birmingham, London, Manchester, Hull, Leeds, Newcastle, Nottingham, Sheffield and Sunderland. There has also been boosts to the 5G in a number of cities including London, Glasgow and Belfast.

If the place you live wasn't mentioned that doesn't mean you will never get 5G, it will just be coming to you later after the trialling period.

Want to know more about 5G and its roll-out? Then head to our in-depth 5G guide for just about everything you could ever want to know.

What kind of speeds can I expect with 5G?

When it comes to 5G, it's hard to give an exact speed to expect. But, at its theoretical max speed, 5G will be topping out at roughly 20x faster than 4G.

While testing 5G devices we were seeing speeds well into the ranges of 500Mb, a speed quite a bit faster than Virgin's fastest broadband package - a company notorious for its blisteringly fast broadband.

It's not just speeds you should be excited about either. With significantly reduced latency, load times will be far faster and we will see much better response rates on our devices.

While this is all great, 5G isn't that readily available and can only be found in scattered locations across different cities, actually getting these speeds can be a challenge. Even in London, the best UK city for 5G connectivity, we found ourselves dipping in and out of 5G range all day.

Although don't get us wrong, there is something incredibly satisfying about downloading an entire film in a matter of seconds - we're just waiting for the time we can do that from anywhere.

What other benefits does 5G offer?

While speeds are the most exciting part of 5G, there are a tonne of other possibilities it will unlock. Like we mentioned above, one of those features is latency. With significantly reduced latency, load times will be far faster and we will see much better response rates on our devices.

On top of that, issues such as signal congestion in busy places will be reduced. This means finally being able to get signal and get online at festivals, sports events and busy cities.

Even things like phone calls, video calls and live streaming will become far more fluid. With a combination of faster latency and better speeds, these services will run better with your new 5G phone deals.

Yes you can. But, as you can probably already guess, 5G SIM only deals don't come cheap. With prices starting at £32 a month for EE, the pricing is far above what normal SIM only deals currently cost.

However, this isn't really a surprise considering how expensive 5G is currently shaping up to be. Luckily, with all of these EE 5G sims, you're getting a tonne of data and EE's 'Swappable Benefits' scheme, which means you are getting quite a collection of features for your cash.

Vodafone has quickly followed EE with a list of its own 5G SIM only deals. They come in at a price lower than EE and all of Vodafone's plans offer unlimited data. However, they are broken into three speeds brackets, going up depending on how much you are willing to spend.

Is there a 5G iPhone?

With Apple's latest collection of phones now available and no 5G iPhone in sight it appears Apple is holding back on going into 5G. Although it was heavily suggested that we could get a 5G iPhone 11, it looks like 2020 will be the year we see a 5G iPhone.