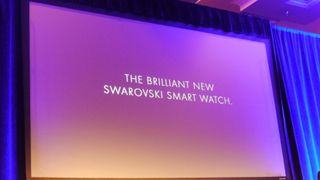 Jewelry brand Swarovski will launch an Android Wear smartwatch at BaselWorld this March.

The announcement came via the Qualcomm press conference at CES 2017, where the chipset maker confirmed its Snapdragon SoC will feature in the new smartwatch.

Swarovski follows in the footsteps of the likes Tag and Fossil as more and more fashion brands step into the new wearable market.

We were shown a short teaser trailor during the press conference, but unfortunately the watch itself wasn't shown. What we do know though is there will be models for men and women.

For now, we'll just have to sit tight and keep an eye on BaselWorld come March.