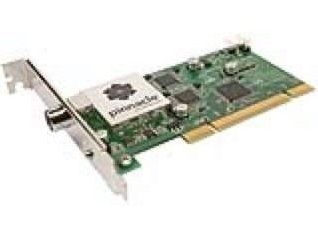 The Dual DVB-T Pro PCI is effectively two cards in one.

Two tuners are better than one

In the UK, Freeview is at the vanguard of the digital television revolution. It can be received through a regular TV aerial and currently around 80 per cent of homes in the UK are able to receive the 30 channels offered by the service.

The transmission uses the DVB-T standard - T stands for terrestrial (there's also S for satellite and C for cable). It's digital so is a prime candidate for your PC. There are many DVB-T devices on the market capable of capturing the MPEG2 stream from your aerial connection.

Unlike most of the competition, the latest offering from Pinnacle is really two cards in one. It has a single coaxial connection for your aerial and a tiny socket for the bundled remote control receiver. Dual tuners enable you to watch one channel while recording another, or watch them both at the same time using the Picture-in-Picture function.

Unfortunately, installation isn't as easy at it should be. Version 4 of Pinnacle's MediaCenter software needs to be installed first, which installs the drivers for the card - drivers are also supplied for Microsoft's Windows XP Media Center Edition. A couple of old DOS boxes appeared as the software and after a reboot MediaCenter failed to find the new device.

We removed the Pinnacle Registry settings (not recommended unless you know what you're doing) and tried again. It worked on the second attempt and we then scanned for channels.

Pinnacle's software is unobtrusive and comprehensive. It enables you to watch television in full screen and schedule recordings using an online Electronic Programme Guide (EPG), for which there's a charge after the first two weeks. As a package it's good value for money, but Hauppauge's card has a similar specification so the decision is down to the software. We think Pinnacle's MediaCenter has the edge in terms of interface design, as long as you don't have problems installing your card.