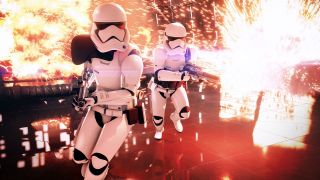 Following fan outrage over the way loot boxes have been implemented in Star Wars Battlefront 2, EA has pulled them from the game entirely just hours ahead of its release.

Overnight, the ability to purchase loot boxes using real-world currency was removed from all platforms and a statement was released from EA DICE boss Oskar Gabrielson explaining the move.

Gabrielson started his statement by thanking the Star Wars Battlefront community for being the “passionate fans that [they] are.” It’s entirely down to you whether your read some exasperation in that description.

He then went on to promise that his team only wishes to create “the best possible game” for the fans and that as such they have a “commitment to constantly listen, tune and evolve the experience as it grows.”

It’s this, he said, that’s led the team to make changes to the game over the past few weeks, such as reducing the number of hours of play required to unlock Heroes who could be purchased much more easily for real money. Gabrielson acknowledged the feeling that this wasn’t enough and apologized to fans for not getting it right:

“We hear you loud and clear, so we're turning off all in-game purchases. We will now spend more time listening, adjusting, balancing and tuning. This means that the option to purchase crystals in the game is now offline, and all progression will be earned through gameplay. The ability to purchase crystals in-game will become available at a later date, only after we've made changes to the game. We'll share more details as we work through this.”

DICE has said it will keep fans updated on its progress around loot crates and as yet there’s no official word on when they’ll return to the game.

A report from VentureBeat suggests that the decision to pull microtransactions from the game was in part driven by a phone call from Disney boss Bob Iger to EA’s CEO Andrew House. It really wouldn’t do to have such negative PR swirling around the Star Wars brand this close to the release date of Episode 8.

While this is a somewhat shocking solution it’s not entirely unsurprising given the build up of community anger over the past week. Loot crates and microsotransactions have always been a point of contention in gaming and Battlefront 2 fans were concerned that this game’s system in particular unfairly influenced progression and performance in matches.

Feeling that EA wasn’t doing enough, particularly when it came to the cost of heroes, fans took to Reddit to complain and EA’s response ended up becoming the most downvoted response of all time. Even cutting the cost of characters wasn’t enough for EA to recover from this and the chaos around the matter resulted in the mainstream press and European Gambling Commissions getting involved.

Given the degree of escalation around the matter, it makes sense that EA has hit the emergency stop button. Released today on all platforms, read our full review Star Wars Battlefront 2 review.