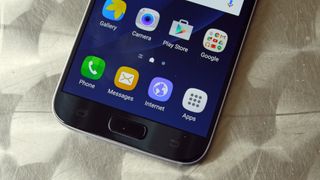 Physical home buttons on smartphones could soon be a thing of the past, as both Apple and now Samsung are rumored to be ditching them from their next flagships, and potentially building a fingerprint scanner into the screen instead.

In the case of the Samsung Galaxy S8, rumors of the home button’s death are fuelled by a post from a Weibo leaker, stating that none of Samsung’s component suppliers have received orders for home button components, which they surely would have done by now, given that the Galaxy S8 release date is pegged for February 26 next year.

That doesn’t necessarily mean the fingerprint scanner would be built into the screen, but we’ve heard whispers of this being the case before now. If nothing else, removing the home button is likely to mean smaller bezels around the screen, which ties into talk from Samsung of an upcoming phone with a 90% screen-to-body-ratio.

In other ways, the screen might stay quite similar to the Galaxy S7’s display though, as the same Weibo source claims the S8 will have a QHD display, rather than the 4K upgrade that had been rumored.

We can believe that, as while 4K would be beneficial for Gear VR, it would be overkill for everyday use, and could have a serious hit on battery life.

Interestingly, the display is also said to use “new materials”, but the source doesn’t specify what those are.

It’s unlikely that Samsung would move away from the AMOLED screens it’s been so highly praised for, but if a fingerprint scanner is being built in then some changes in material might be necessary.

Of course, with no evidence to back any of this up we’d take these rumors with a big pinch of salt for now... just try not to get too attached to your home button.