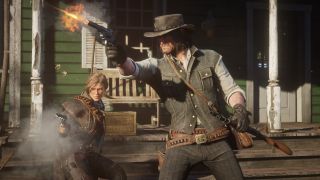 After months of speculation, Rockstar has just confirmed that the Red Dead Redemption 2 PC version is real – and it's coming November 5.

The confirmation was just posted on Rockstar's Twitter page. There's not much to go on, except we now now it exists, and it's coming (very) soon.

Red Dead Redemption 2 looks phenomenal on PS4 and Xbox One, so we can only imagine what kind of visual treat awaits us when it comes to the more powerful PC platform.

As the first Red Dead Redemption game to come to PC, it looks like Rockstar is making a big deal of it, with a range of new graphical and technical enhancements, so it should look better than ever.

If you pre-order before October 22, you get to choose two free games:

If you pre-order through the Rockstar Games Launcher, you'll also get free upgrades to the premium edition of Red Dead Redemption 2, and the Special and Ultimate editions are discounted by $20 each.

You also get the following pre-order bonuses through the Rockstar Games Launcher:

PC gamers will also get access to online world of Red Dead Online, which will feature all previously released updates that have come to the consoles.

Best of all, unlike the PS4 and Xbox One, you don't need to pay for online access, so Red Dead Online is completely free on PC.

Coming to other stores October 23

Red Dead Redemption 2 PC is also coming to other online stores, including Epic Games Store, Greenman Gaming and the Humble Store on October 23.

If you want to buy it on Steam, then you'll have to wait even longer – it'll come to Valve's platform in December.

It'll also be coming to Google Stadia, the game streaming console, as well.

As soon as we hear more about the PC version of Red Dead Redemption 2, we'll be sure to update you.