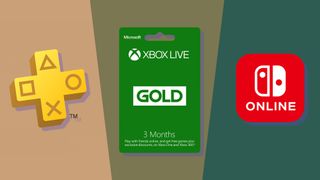 In this interconnected age, it can be difficult to keep track of which online subscription service offers the best bang for your buck. While services like Hulu and Netflix are arguably similar, games consoles are a little more varied in their options.

Each of the big three consoles has an online subscription service, and each offer things slightly differently.

Beginning with Xbox Live Gold, Microsoft's offering is priced at $9.99/£6.99/AU$10.95 per month, while offering savings of 50% for an annual membership. Silver membership is free, but only really offers access to your friends list and the Xbox Store.

If you've been looking to jump into the company's game subscription, Xbox Game Pass, there's a handy $14.99/£10.99/AU$15.95 membership which bundles both Xbox Live Gold and Game Pass into a handy monthly fee known as Game Pass Ultimate.

PlayStation Plus offers a similar pricing model to that of Xbox Live Gold. It costs $9.99/£6.99/AU$10.95 per month, while you can buy it quarterly or annually at an incremental discount. Features are comparable too, but we'll get to those shortly.

There's a family plan option too, which is ideal if you have a group of up to eight friends looking to take their consoles online - this retails at $34.99/£31.49/AU$54.95 for the year. Amazon Prime members can even snag an annual membership for nothing at the time of writing.

The oldest of the services, Xbox Live's paid Gold Membership offers plenty for your monthly fee. Arguably the most reliable connection of the three, Xbox Live connects players with gamers across the world - so if you're looking to command a pirate ship with your buddies in Sea of Thieves, you'll need to stump up for a membership.

Thankfully, there are plenty of other reasons to subscribe. Firstly, players can grab themselves four free games every month as part of Games With Gold. This month features Game Of The Year contender Inside, so it's worth checking back each month to see what's on offer.

Of the four games, two are Xbox One titles while the other two are backwards compatible Xbox 360 (and occasionally original Xbox) classics. You'll also earn some great discounts in the store, and these often apply to DLC, movies and TV shows as well as games.

PlayStation Plus began as a premium membership during the PlayStation 3 era, but is now required for online play on PlayStation 4. Thankfully those monthly fees look to have been reinvested, as PlayStation Network has come on leaps and bounds since the last generation.

As with Xbox Live Gold, PlayStation Plus offers free games each month (albeit down to two with the removal of PlayStation 3 and Vita titles earlier this year). Don't panic though - huge AAA-calibre titles such as Bloodborne have been released as freebies in the past, so it's unlikely you'll feel short changed. Similar discounts are offered in the PlayStation store, and you can see what's new from a PlayStation Plus icon right on your home screen.

In true Nintendo fashion, Switch's online service feels a little bit all over the place. Your subscription allows you to play online in titles such as Super Smash Bros. Ultimate and Mario Kart 8: Deluxe, but the console's portable nature can make connection a little spotty.

The extra features are curious, too. You can use Nintendo's smartphone app for voice chat in certain titles, but in testing we found it less useful than simply using Discord to party up. There are exclusive offers for subscribers, but these run the gamut from nice little curios (like Tetris 99) to exclusive peripherals like NES controllers for the Switch.

The big draw here, though, is the Nintendo Switch Online app. Longtime Nintendo fans will love being able to play NES games on the Switch, and they've been retrofitted with new online leaderboard functionality in many cases. That means you can play the original Legend of Zelda or Super Mario Bros 3 on your TV or on the console's handheld screen. New titles are being added, and SNES games are rumored to make an appearance next.

PlayStation Plus offers 100GB of cloud-storage for your saves as part of it's membership, but it's worth noting that Xbox Live offers cloud saves and these aren't linked to any paid membership and are available by default for silver members upwards.

Nintendo Switch Save Data can be backed up to the cloud if you have a membership, a huge boon for anyone that's ever dropped their Switch or lost it on public transit, but it only works on supported titles - so if your console takes a bath you'll have to start your Pokemon: Let's Go adventure all over again.