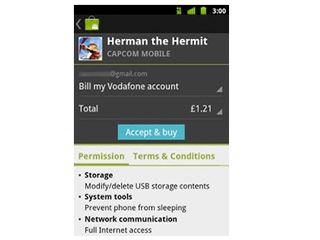 You're under no obligation to buy Herman the Hermit, though

Vodafone is the first European network to offer operator billing for its Android owning, app loving customers, having announced that the roll out will start today.

This means that Android owners on Vodafone contracts can charge their App Market purchases to their phone bills rather than paying via credit card as they go.

If you're on pre-pay, you can still take advantage of the new service by using your credit to buy apps instead of making calls.

Vodafone says the service will "initially" be available to customers who bought their handsets through Vodafone online and its high street shops.

In a blog post aimed at developers, Vodafone explains, "In addition to facilitating the best possible user experience, Vodafone operator billing extends your reach to the large number of app buying customers who are unwilling or unable to use credit cards. In some countries this can be more than 90% of the market."

The service is rolling out across the UK and Germany from today, so Vodafone customers should keep their eyes peeled for the new option in the Android market.