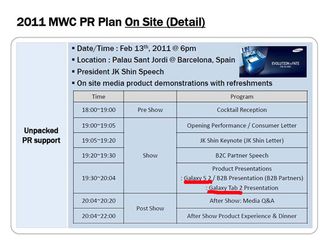 The Tab 2 and Galaxy S2 are both on the schedule

A leaked PR schedule indicates that Samsung will announce a follow-up to its Samsung Galaxy Tab slate at Mobile World Congress 2011.

The slide, which outlines the schedule for the 13 February press conference, lists "Galaxy Tab 2 Presentation" in the weirdly precise time-slot of 19:30 – 20:04.

Along with the tablet reveal, the Samsung Galaxy S2 is set to debut, which comes as no surprise following various leaks and Samsung teasers in the run up to the show.

Hopes will be high for a Tab successor that will ship with Android 3.0 and there have been whispers that Samsung is working on something with a 10-inch screen – a nice upgrade from the original Galaxy Tab's 7-inch display.

When Samsung announced a Wi-Fi version of the Samsung Galaxy Tab at CES this year, we were a bit disappointed not to see another size on show; perhaps this particular dream will come true at MWC.

Back in January, Samsung also revealed that it will unveil a dual-core tablet at MWC – could it be the Tab 2? We'll find out on 13 February, where we'll bring you the news as it breaks and our hands on Samsung Galaxy Tab 2 review.