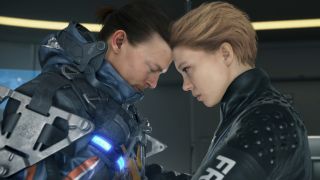 We're creeping ever closer to the release of Hideo Kojima's Death Stranding and yet, with just three months to go, we're still in the dark as to what exactly the game is about.

However it seems we'll be getting a closer look at the title during Gamescom 2019, according to Geoff Keighley.

Keighley is hosting Gamescom 2019's Opening Night Live, pre-conference stream live from Cologne that promises announcements and new content from the likes of 2K, Square Enix and Google Stadia (among many others).

In addition, Keighley has announced Death Stranding creator Hideo Kojima will also be making an appearance during the show to "premiere a exclusive look at Death Stranding".

Exited to announce @HIDEO_KOJIMA_EN will be live in Cologne during @gamescom Opening Night Live on Monday, August 19 to premiere a exclusive new look at DEATH STRANDING. ONL will stream around the world across all major platforms! pic.twitter.com/HYD9UZXS1JAugust 6, 2019

Hopefully the new footage will explain a bit more about Death Stranding's gameplay mechanics and what we can expect in terms of narrative.

But this is Hideo Kojima we're talking about, so don't expect everything to be so straightforward...

How can I watch Opening Night Live?

We'll be reporting live from Cologne during Gamescom 2019 week, but if you can't be there in person then you can watch the Opening Night Live stream from the comfort of your home.

Death Stranding will release exclusively for PlayStation on November 8, 2019.