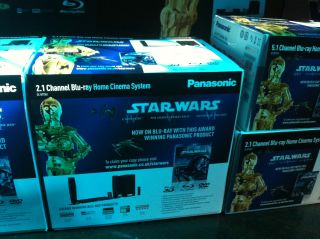 Panasonic's David Preece has insisted that the arrival of Star Wars on Blu-ray is a pivotal moment for the entire format, telling TechRadar that forging a partnership over the film was a big deal for the company.

Panasonic will be offering the three original (and best) Star Wars Blu-rays with many of its key products, and Preece, who is in charge of the Blu-ray category in the UK is convinced the timing is perfect.

"It is a seriously important moment," he told TechRadar. "Blu-ray is a fantastic format but the transition from DVD to Blu-ray has not been quite as dynamic as people would have hoped.

"This is an important part of allowing people to compare the differences between the two formats with one of the greatest film series.

"This marks the renaissance of the Blu-ray format."

Preece admits that Panasonic had to work hard to be involved in the Blu-ray package.

"It's very meaningful," he said, "and we were very keen to be a partner. I went to tie up the deal and talk cash and actually found myself pitching against another serious contender!"