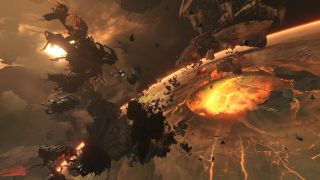 The Doom Eternal release date has been postponed, it seems. Despite months of hype for the next fast-paced, hyper-violent Doom entry – a sequel to the well-received 2016 Doom reboot – we've been told that Doom Eternal won't be hitting shelves or online stores until March 20, 2020.

Doom Eternal previously had a release date set for November 22, meaning gamers who had pre-ordered the game, or just been building their anticipation, will likely be left disappointed. However, as anyone who's played a game released too early will testify, this will likely be a good thing for the experience in the long run. (Cough, Anthem, cough.)

"To make sure we’re delivering the best experience - for DOOM Eternal to live up to our standards of speed and polish - we’ve made the decision to extend our launch date by a few months to March 20, 2020.  We know many fans will be disappointed by this delay, but we are confident that DOOM Eternal will deliver a gaming experience that is worth the wait."

But that's not all!

To try and make the move sting a little less for the Doom fans out there – who are no doubt in their own personal hell right now – Bethesda has clarified what to expect around the Doom Eternal release.

The first is that Invasion Mode, an online mode that lets you trash through another player's campaign as a monstrous demon, will be coming "as a free update shortly after launch". The Nintendo Switch version of the game will, as expected, be launching sometime after the main title, but there's no confirmed date as of yet.

On a more positive note that doesn't involve any delays, Bethesda will be gifting Doom 64 – the Doom title released on Nintendo 64 in 1997 – to anyone who preorders Doom Eternal before the March 20 launch. The game will release alongside Doom Eternal on the same day.