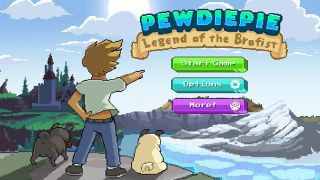 PewDiePie: Legend of the Brofist!

YouTube sensation PewDiePie - 10 billion channel views, 39 million subscribers and counting - is launching his own mobile app in a bid to further extend his digital empire.

Real name Felix Arvid Ulf Kjellberg, PewDiePie has earned a fortune from his YouTube vlogs, which originally involved humorous video game walkthroughs and have since expanded to cover various other related topics.

The new app (Android, iOS) is called Legend of the Brofist, playing on PewDiePie's well-known YouTube logo and fist-pump salute. It's a fairly standard 2D pixelated platformer but it's sure to appeal to the online celebrity's army of fans.

The game features a host of PewDiePie's YouTube friends and involves boss fights, coin collecting and just about every other video game staple. Rather than paying for in-app purchases, you have to pay up front - £3.99/$4.99.

PewDiePie's famously exaggerated reactions play on top of the action in an obvious attempt to capture the chemistry of his video channel - beloved by many and baffling to many more.

The Swede's channel was the most popular of 2014 - apparently earning him some $7.4 million in advertising revenue - but if the bottom falls out of the vlogging market there's always games and books to fall back on.