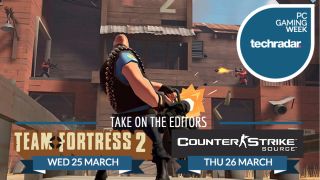 See you in the arena!

We're pretty keen gamers here at TechRadar – and competitive ones at that. As such, we've got ourselves a gaming server to give you – the readers – the chance to test your trigger finger against us in the online arena.

On Wednesday March 25 and Thursday March 26 we will be hosting gaming nights where you can take on editors from not only TechRadar, but also those from various gaming titles owned by our parent company, Future.

For the Wednesday event TechRadar's UK-based editors will be duking it out against you on Team Fortress 2. It kicks off at 19:00 GMT and will run until 22:00 GMT, at which point we will swap over to our US-based colleagues to continue the mayhem.

On the Thursday we will resume the action on Counter Strike: Source, starting at the same time and swapping over to the US at the same time. Both servers are 32 vs 32 players, so spaces will be limited.

The events will form part of PC Gaming Week on TechRadar (spoiler alert!) which is due to run from March 22 to March 29. Expect a ton of PC gaming-related coverage, including in-depth features, exclusive interviews and a whole host of retro-themed content from Future's rich 30-year history.

Can't wait until then? Our servers, which are hosted by Multiplay.co.uk, are up and running today and can be joined on the following IP addresses. Don't forget to add us to your favourites!

See on you on the battlefield! GL & HF.