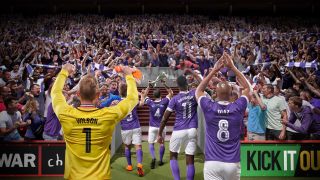 Football Manager 2020 is coming to Google Stadia and, according to developer Sports interactive, will play fastest on Google's new platform.

While the developer didn't announce any details on new features coming to the football management sim, it did announce that Football Manager 2020 will release in early November for PC, Mac and as a launch title on Google Stadia.

In a press release, Sports Interactive announced that "Football Manager 2020 is set to make its debut on Google’s Stadia and will be the fastest way to experience Football Manager."

"Football Manager on Stadia includes technology that is only available on that platform, utilizing the power of the cloud and Google’s data centers to ensure that more matches can be processed in parallel utilizing spare bandwidth across the whole system."

"This means you can have more leagues loaded into your save, or just go for a faster experience by keeping the amount of leagues the same, but having the matches process quicker than you can on any other platform."

Just last week Google Stadia announced a whole heap of games that will be coming to the service.

There's only a single exclusive to date, but with titles like Football Manager 2020 joining the roster (and promising to perform even better than on other platforms) Stadia is becoming a better proposition by the day.