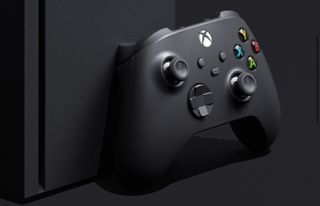 Microsoft saved a massive announcement for this year’s The Game Awards: the official name for its next-generation Xbox console. Unfortunately, however, the name fails to tell us anything at all about what the console does.

So what's it called? The Xbox Series X, that's what. We’d previously been working with the console’s codename, Xbox Project Scarlett, which now joins the Xbox Scorpio (what you’ll know as the Xbox One S) as examples of temporary names that actually had a lot more personality than the bland branding they were replaced with.

So what’s so bad about Xbox Series X? And does the name even matter that much?

Certainly, we’re still getting a high-powered gaming machine that will see a massive boost in performance over the current generation of Xbox consoles, with 120Hz frame rates, ray tracing, and a solid state drive. (You can see more on these specs in our Xbox Series X guide.)

But Microsoft’s unwillingness to embrace a distinctive identity for its new console, perhaps taking inspiration from its enhanced capabilities, or run with the simple and consecutive ‘Xbox Two’ – as Sony has done with the PlayStation 5 – risks blurring the distinction between console generations. And this could doom the Xbox Series X’s chances of swinging players away from the PlayStation platform, which has proved the clear winner among the current console generation.

Nothing to see here!

Here’s the problem. The Xbox Series X sounds like a synonym for (or rebranding of) the current-gen Xbox One X, and there will no doubt be plenty of people struggling to see the difference between the two – especially given that both will be on sale alongside each other for a significant amount of time.

The closest parallel to this situation is with the Nintendo Wii U, which saw dismal sales compared to its successful predecessor, 2006’s Nintendo Wii, something that was widely attributed to its confused messaging. Was it a new console? A tablet controller accessory? Or something else altogether? Many players weren’t quite sure what they were getting, and that meant relatively few of them felt the need to replace their current Wii console, or choose Nintendo over Xbox or PlayStation.

Nintendo sidestepped this problem with 2017’s Nintendo Switch by naming the device for its distinguishing feature – the ability to ‘switch’ between handheld and docked play. Even the DS family of handhelds are clear about what differentiates each from the other: the ‘New’ Nintendo 3DS is a new version, the 3DS ‘XL’ has a larger screen, and ‘2DS’ doesn’t have 3D. You know what you’re getting when you buy any of these devices.

Much of the strength of Xbox and PlayStation hardware lies in the fact that it’s clear what they do: you don’t need to make sure that your PC has the necessary specs to run a particular game effectively, as you know that an Xbox One console will be able to play an Xbox One game. For gamers who don’t pore over detailed hardware specifications, strong communication as to the functionality and hierarchy of each console is necessary, and the name forms a big part of that.

Gunning for the X-factor

What makes Microsoft’s choice of Xbox Series X so baffling is that we were explicitly told the name would reflect the new console’s capabilities. Back at XO19, Xbox boss Phil Spencer went on record with Stevivor to say that “Our naming convention has been around what we think the capabilities are.”

The Xbox Series X completely abandons this logic. While the Xbox One X’s name helped to distinguish it from the Xbox One S – and the letter ‘X’ certainly carries connotations of power, as in X-factor, Xtreme, and so on – Microsoft can’t get away with simply reusing the same shtick in the next console along. The Series X is supposed to be four times as powerful as the One X, and will certainly offer a far superior gaming experience, but that isn’t being communicated clearly enough.

Something along the lines of ‘Xbox 120’ (for its 120Hz frame rate) or ‘Xbox Nitro’ (for its speed) would have made more sense in terms of describing its capabilities. ‘Xbox Pro Series’ or ‘Xbox Hero’ would stress the enhanced performance. ‘Monolith’, ‘Domino’ or ‘Jet’ would take inspiration from its black slab-like appearance. Even the relatively prosaic ‘Xbox 2.0’, ‘Xbox 2020’ or ‘Xbox Neo’ would have helped to make the console’s place in the Xbox family clearer.

All of those names are the result of a five-minute brainstorming session in the TechRadar office, and Microsoft certainly had the time, and the marketing budget, to come up with one of those, or think of something better.

We just hope the console’s strengths in terms of raw power and features, and Microsoft’s promise of a stronger lineup of exclusive games for the next-generation console, will help it to cut through the Xbox Series X’s mixed messaging. Otherwise, Microsoft may have to wait even longer for another shot at taking the crown as maker of the world’s favourite gaming console.