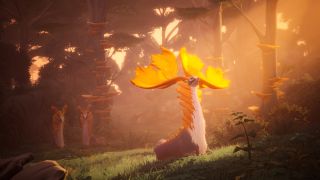 During X019, Sea of Thieves developer Rare announced its new exclusive IP for Xbox One - and it's giving us serious Breath of the Wild vibes.

The new game, Everwild, was shown off in a short trailer that showcased a magical world that seems to be inhabited by quite a few interesting creatures. We're not quite sure what the gameplay will be like, but the Everwild trailer (embedded below) suggests it'll be a bit like Monster Hunter World - without killing the monsters.

Rare has created some beloved franchises over the years, including Banjo-Kazooie and its spiritual successor Yooka Laylee. Since its acquisition by Microsoft, it's been focusing on games for the Xbox platform and it looks like Everwild is set to be a notable exclusive.

Craig Duncan, Studio Head at Rare wrote in the press release that, "While Everwild is still early in development, we are very excited about the unique potential of the game we are creating. The Everwild team is focused on building an experience that allows for new ways to play in a natural and magical world.

"The development team, led by Executive Producer Louise O’Connor, is creating something truly original and incredibly special that aims to be more than just a new IP. Everwild will give you memorable, engaging and meaningful experiences for players everywhere to share."

While there's no Everwild release date as of yet, the timing of the announcement suggests it could be a cross-generation title, landing on Xbox Project Scarlett as well as Xbox One.

A press release for the announcement calls it "as big a moment for Rare" as the launch of Sea of Thieves back in 2015, so it's clear the plans for Everwild are sizable. Mentions of players being able to "share" experiences also suggests some online or multiplayer component, meaning we could see something in the vein of Sea of Thieves' online world.

We also found out that November 20 will see Sea of Thieves' Seabound Soul update be released for free, adding in a new Tall Tale campaign with the following description: "Join Captain Pendragon to uncover the mystery of the feared ship, the Ashen Dragon, and reveal the secrets of a sinister new threat."