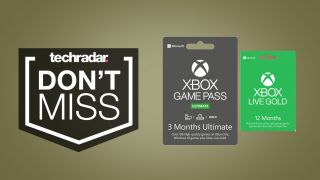 We're running through three ways to save money with a cheap Xbox Game Pass membership, thanks to some excellent Game Pass and Game Pass Ultimate deals going right now. There are now more ways than ever to save - whether you're new to the service entirely, or if you're simply topping up your subscription.

These deals come from CDKeys, a well trusted digital marketplace specializing in digital content across the world. If you want to shop around other retailers, you can check out the latest Game Pass deals from around the web further down the page, or check out the best Game Pass prices we've found right here on TechRadar.

You can grab three months of Xbox Game Pass (without online play) for just $9.99 / £9.99 right now. That's an astonishingly cheap price if you're just after access to Microsoft's 100+ game library. If you're already a Game Pass member and you're just looking to top up, or if you've picked already grabbed a Game Pass Ultimate subscription and want to calm down that monthly expenditure this is a great deal.

Xbox Game Pass | 3 months | $9.99 / £9.99 at CDKeys
A three-month Game Pass membership is under $10 / £10 at CDKeys right now. That's a fantastic price for access to over 100 games in the Game Pass library, and certainly one to snap up before it disappears.
View Deal

If you're new to Xbox, however, there are plenty more savings to be found. We've also been spying some excellent Game Pass Ultimate deals that package the Game Pass library with Live Gold online play that may swerve your decision.

You can pick up a six-month Xbox Game Pass Ultimate deal for just $29.49 / £21.99 at CDKeys right now. That nets you access to the Game Pass library, online play, and exclusive discounts as well - all for a fantastic low price right now. Note that these codes will only work with new Xbox Live accounts, so if you've already got an existing account you might want to check out our best Xbox Game Pass prices or check the Game Pass deals above.

Xbox Game Pass Ultimate | 6 months | $29.49 / £21.99 at CDKeys
This deal is for new Xbox Live accounts only, but if that's you this cheap Game Pass Ultimate deal is an excellent saving on a six-month membership. You're saving 63% on a subscription to the massive Game Pass library of free titles, online play, and extra discounts across the Microsoft Store.
View Deal

The latest deals from CDKeys offer some of the lowest prices we've seen on six-month Xbox Game Pass Ultimate subscriptions so far. Nevertheless, there are more savings to be had for the savvy shopper. Before you dive straight in, you might also want to look at those 12-month Live Gold deals because Microsoft has a little trick up its sleeve that can save you a wad of cash on your 2020 gaming.

Microsoft is still running its own Xbox Game Pass Ultimate deals, which offer the first month of the service for just $1 / £1. Similarly, you have to be new to the Game Pass Ultimate service, but if so there's a kicker in this deal that makes this all-in-one subscription particularly cheap at the moment.

Microsoft states that when you redeem your first month for $1 / £1, all your existing Live Gold or Game Pass months will be upgraded to Game Pass Ultimate, up to 36 months. That means a stacked Xbox Live Gold subscription, a substantially cheaper service, can be converted into a premium Game Pass Ultimate membership.

Six months of Xbox Live Gold can be found for the same price as this particular Game Pass Ultimate deal right now, but picking up 12 months for $53.59 / £39.99 gives you far more value for money and sets you up with free games for the whole year once you convert your months. Just make sure you redeem your Live Gold membership before signing up to Game Pass Ultimate.

Looking for more great Xbox Game Pass prices? We've got them all right here on TechRadar. We're also tracking all the latest Live Gold membership prices to keep you ahead of the game. While you're shopping, it might also be time to refresh your equipment - check out all the best Xbox controller deals around right now.