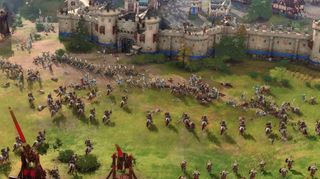 Microsoft may have not revealed much new about Xbox Project Scarlett at its X019 conference, but it did reveal a host of new games, and one hotly anticipated one in particular – Age of Empires 4.

The veteran real-time strategy series has had a sequel cooking for some years now, and Microsoft took the opportunity to finally pull the covers off what the game's gameplay will look like.

And, if you're a fan of Age of Empires 2 – which you should be, as it's one of the greatest strategy games of all time – you're in for a treat. Age of Empires 4 looks like a true successor to that lauded title, with action-packed medieval warfare and city building:

Those raised on the isometric Age of Empires titles will be looking at those detailed building and troop models with glee – this looks set to be a beautiful strategy game, with battles taking place on a grand scale.

The trailer also gives us our first look at some of the civilisations that will be playable in the game, with what looks like the Mongols and the English going head to head.

And yes, the uber-powerful trebuchet ranged units will be making a return – watch how their missiles cause a castle fortification to crumble.

Being developed by Relic, known for the superb Company of Heroes and Warhammer 40,000 strategy series', we've yet to receive a full release date for Age of Empires 4. But needless to say, we can't wait to strap on a suit of armour and start barking orders at our pikemen.