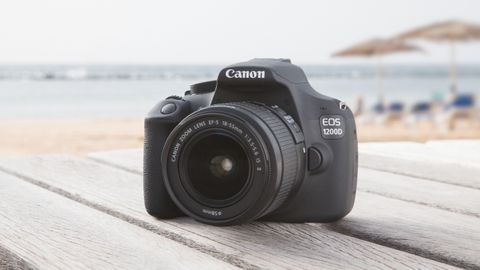 The Canon 1200D is an SLR, so it has an optical viewfinder - and you can use interchangeable lenses.

Canon has once again produced a reliable camera capable of creating some beautiful images. If you're in the market for your first DSLR and you're fine with a no-frills purchase, then the 1200D is a great option.

Despite the low price points, the entry level of the DSLR market is very important for building customer loyalty.

The new Canon EOS 1200D replaces the 1100D, which is now three years old, and sits just below the ultra-small 100D as the first camera in the line-up.

Rather than a major overhaul of its predecessor, the 1200D is more of a gentle upgrade, which in conjunction with the new app being launched for iOS and Android, is designed to entice beginner users.

The app gives the user a walkthrough of the camera's key functions, as well as dishing out tips and advice on how to use it. There are also tutorials and inspirational challenges to get new users motivated with different ideas to try out.

Featuring an 18 million-pixel sensor, the camera has a Digic 4 image processor, which although not the most recent Canon imaging engine, has proven itself to be a decent performer in previous Canon models.

Aimed squarely at the entry-level user, it comes packed with several automatic modes, including Scene Recognition Auto and some Creative modes to give images a different look, something that may appeal to mobile phone and compact camera users. Unlike with the 100D, these filters can only be added post-shooting, rather than before the image is taken.

On the back of the camera is a 460k dot resolution, 3-inch, screen, which is neither touch sensitive nor articulating/tilting. It's joined by an optical viewfinder that offers a 95% field of view.

Full HD video recording is included, which means that the whole Canon DSLR line-up now has the capacity to record high resolution movies. You can also take full manual control of video recording, which is nice to see on an entry level model.

The camera's native sensitivity run starts at ISO 100, rising up to ISO 6400, but this is expandable up to 12800. As the camera doesn't use the most recent image processor, it will be interesting to see how well it copes with noise in high sensitivity and low light situations.

There are nine autofocus points, with just the central point being cross-type for extra sensitivity. This is the same as the 1100D, and not quite as good as the 100D, which although also featuring a nine-point AF system, has a central point that is f/2.8 sensitive.

The camera can shoot at up to 3fps, which doesn't compare particularly well with the Nikon D3300's 5fps capability.

Canon hasn't included built-in Wi-Fi or NFC connectivity for the 1200D. That may be slightly off-putting for those coming from a smartphone background, but it's to be expected at this price point. The camera is compatible with Eye-Fi cards though, if you want to expand its capability.

Battery life is claimed to be up to 500 shots, which is a reasonable offering. Again though, it doesn't compete too well with the Nikon D3300, which claims over 700 shots per charge.

As mentioned, the 1200D goes against the very successful Nikon D3XXX range, of which the Nikon D3300 is the latest model. Although both sit in the same position in each other's respective line-ups, the Canon, for now at least, is much cheaper.