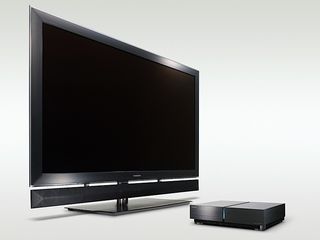 Is Toshiba's Cell TV the future of home cinema?

Toshiba has announced that the technology behind its super-powerful Cell TV range will find itself in its LED series of TVs sometime in the near future.

Speaking at its over-subscribed CES 2010 press conference, with TechRadar in attendance, Scott Ramirez, Vice President of its Marketing TV group, announced that Cell TV's technology will filter into other aspects of Toshiba's burgeoning telly business.

"2009 saw over 27 per cent growth of HDTVs in the world. This broke down to around 34 million LCD TVs which will be sold next year," explained Ramirez about the state of the market.

"Pricing on TVs is coming down, it is like a ski slope. But in the big screen market, 42 inch and above, prices went up. And this is because of LED TV. The premium technology shows that consumers are willing to pay for quality."

When pushed about what other technology we'll likely see in Toshiba's LED TV range (10 lines of Tosh's TVs will be LED this year), Ramirez remarked that: "Cell TV technology will integrate into future LED TV lines.

"We believe that Cell TV is powering the future."

Toshiba are so behind Cell TV that it was not only the focal point of its CES 2010 press conference but the only thing, other than the standard TV range refreshes, properly announced.

Although the company did unveil the TV at CES 2009, and also showed it off at last year's IFA press conference in Berlin, it is still pushing the technology, as 2010 will finally be the year we will see Cell TV hit the shelves.

Cell TV is being touted by Tosh as "offering up a whole new dimension in entertainment."

At its heart is the Cell Processor, currently seen in Sony's PlayStation 3. The technology means that Cell TVs will be 10x more powerful than most PCs on the market (there's eight core processors; each processor is 3.2 GHz) and whopping 143x faster than most tellies on the market.

As Ramirez remarked, "Cell TV is not just a TV. We are moving beyond just television."

While there's no exact time as to when we will see the Cell technology integrated into its LED range, it does point to where Toshiba sees televisions going – becoming immersive media hubs for the home.