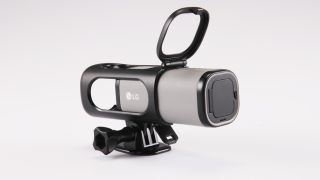 Known to flaunt its Friends with reckless abandon, LG has brought another one to the table with the introduction of the LG Action Cam LTE.

As the name would suggest, the latest addition to LG's range of smartphone accessories (or 'Friends') is an action camera with built-in LTE connectivity – handy for streaming directly to sites such as YouTube Live via wireless 3G or 4G networks.

It's powered by a Qualcomm Snapdragon 650 processor, and has been rated IP67, meaning it can be immersed in up to one metre of water for up to 30 minutes, along with being dust and sand-proof.

Though release dates for Australia, US and UK have yet to be announced, the LG Action Cam LTE has already started rolling out in South Korea, meaning its international release should be right around the corner.