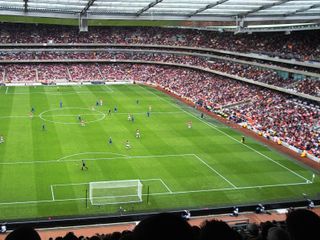 PSP's at football grounds: the next big thing?

Those willing to fork out an arm and a leg to watch a load of men punting a ball around a pitch will soon be able to go 'oh, what just happened?' on a more regular basis.

Sony is trialling a system where live replays during the game can be streamed to a PSP, allowing the fans to make their own decisions on replays.

This means that every time a goal is disallowed, the whole stadium will ring out in a chorus of clicks as everyone turns on their PSP to see if it really should have been allowed.

The tests are being carried out at Arsenal's Emirates Stadium at the moment, but hopes are high that it could be rolled out to more venues.

"Arsenal is the only club/ground we're trailing this technology in for the moment," said a senior Sony representative to videogaming247.

"[However] depending on successful trials, it's likely we'll look to roll it out with other clubs."

Not only that, but the plan is to allow fans to eventually link together in a smorgasbord of footballing fun, meaning that if your favourite player scores a goal, you could write: "OMG, did u c that?"

To which the reply, from the fellow at the same ground, would be: "yes".

Sony retail boss Eric Siereveld said: "This device will brings an extra dimension to the game with information and statistics.

"But we think that the next generation of the software that runs it could actually link fans during the game with each other."