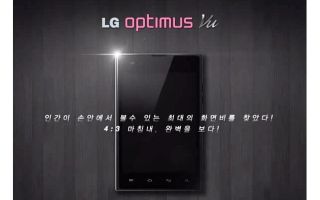 LG has released a video showing a first glimpse of the Optimus Vu, a smartphone with a 5-inch display with an unsual 4:3 aspect ratio.

The Korean video doesn't reveal much else about the new handset other than its screen dimensions and a murky glimpse at its outside appearance.

However, Korean sites Datacider and Google Pad have come up with some further details for the Optimus Vu between them, including a 1024 x 768px IPS display for that headline 4:3 aspect ratio.

Inside, the Optimus Vu has a 1.5GHz dual core Snapdragon processor tied to 1GB of RAM and 8GB of internal storage.

It also features an 8-megapixel camera along with NFC support.

The Optimus Vu's 5-inch screen is getting into Samsung Galaxy Note territory, though the 4:3 aspect ratio seems like a bit of a strange choice.

There's no indication of when or if it will make it out of Korea and into the UK and other territories, but as closet 4:3 fans we hope to get our hands on it soon.

To cast your own eye over LG's new baby, have a look at LG's Optimus Vu video yourself.

Via The Verge, Datacider, Google Pad