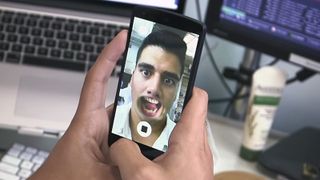 It's becoming increasingly difficult to impress people with your new smartphone or tablet. Angry Birds, just doesn't cut it anymore. That's why Google has created Android Experiments, an initiative that celebrates the most creative, visually-striking of applications coded on the Android platform.

As it stands currently, the Android Experiments gallery is 19 entries strong and features an eclectic mix of edgy, watchfaces for Android Wear-powered smartwatches and apps that utilize the internals of your Android smartphone in a unique way.

One of the apps called Boo! populates your phone's screen with tiny creatures who will scatter adorably upon seeing your face with the front-facing camera. Another one, called Landmarker, provides a minimalist-friendly version of Google Maps, but only points out, you guessed it, famous landmarks.

Google encourages eager creators to submit their own applications to Android Experiments. But, there are a few guidelines to follow if you want to be featured on the site's gallery. For example, your submission must "show something shiny right away" and needs to have "unique and extraordinary visual aesthetics." Go on, submit! We know you can do it.