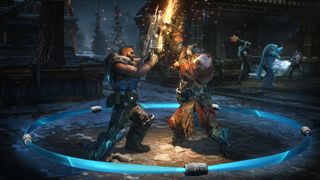 As we count down the days until Gears 5's September release date, The Coalition has announced some more details around how players will be able to earn new content and items as they play.

In a blog post on the official Gears 5 site, which puts an emphasis on creating a "player-first experience", it's been confirmed that DLC maps for the game will all be free in both matchmaking and private play, meaning you won't be excluded from playing with friends just because you don't have the right maps.

Something else of interest to players is a new Tour of Duty system, which will offer a way to earn new customization content such as character skins. This system, which essentially sounds like a free battle pass, will introduce daily challenges and seasonal medals which, when completed, will unlock cosmetic items. These items and challenges will change with each season to keep things fresh.

It will, according to The Coalition, be clear to players what's required of them to unlock the items they want and this system won't feature any kind of premium, paid content.

Another way to unlock new items for free (at least in monetary terms) will be to simply play the game thanks to Supply Drops. Every moment of play across Gears 5's multiplayer modes will contribute towards you earning a random item from a designated Supply pool. This pool of items is apparently unique and nothing in it can be purchased using real-world money. If you get a duplicate item, it'll automatically be scrapped and you'll be able to use the remnants to craft items or apply some skill upgrades.

That's not to say Gears 5 is utterly bereft of purchasable items. The game will have its own currency called Iron, which can be purchased with your real-world money as well as picked up in limited amounts through Tour of Duty.

Iron will allow players to buy exclusive cosmetic items in the in-game store, but to keep things fair all of these purchases will be direct (so no Gear Packs or random generations) and none of the items will give players any kind of competitive advantage in the game.

You can, however, spend your Iron on a Boost which will offer "accelerated progression for a period of real-world time" which could last for a single day or a whole week. Boost will provide double multiplayer XP, double character player XP in Escape and Horde modes and double speed Supply Drop progression.

It's worth noting that this doesn't mean you'll get Supply Drops faster than anyone else, as a representative for The Coalition has said on Reddit that these drops are "based on time" therefore aren't boostable, just as "XP has no impact on content".

It's yet to be confirmed how much Iron will be required to purchase Boosts. Hopefully the sums dropped in Tour of Duty will be enough to cover a couple of purchases to give players a taster.

Overall, the changes seem like positive steps for Gears 5 and will go some way to assuaging pay-to-win concerns of those thinking about picking up the game when it launches in September. The Coalition is promising to share more information about the game before that launch date so keep an eye out.