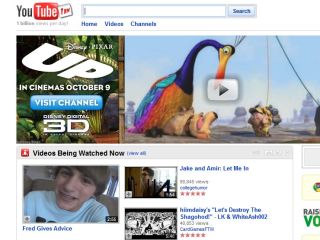 YouTube today unveiled a new masthead, which brazenly shows off just how many people visit the site on a daily basis.

Google, the owners of the video-upload website, have been tweaking YouTube almost as much as Facebook changes its style lately, but this new re-jig isn't about making the site easier to use –
it's merely one big brag.

If you click on YouTube.com, you will see that its logo has changed to show that the site gets 1 billion hits. A day.

That's right, 1 billion videos are viewed in 24 hours – that's the equivalent of a sixth of the world's population logging on to watch a cat jump around in a funny way, or to see the latest failure/winner on X-Factor.

A quick look doesn't actually bring up any new functionality. The only big change is a massive amount of advertising for Disney Pixar's latest offering UP – quite apt, given just how high YouTube's stats actually are.