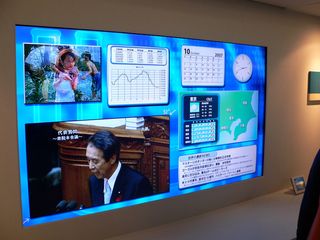 We mentioned the possibility yesterday and today we have confirmation that Sony and Sharp will definitely work together to make screens for LCD TVs.

The two Japanese powerhouses revealed that they will be creating a joint venture to pump out the millions of glass panels flat-screen TVs are going to need over the next few years.

As yet unnamed, the Sony/Sharp venture will set up shop in April next year with a view to getting going by the end of that financial year. Sharp will own 66 per cent of the venture and it will be based in the new Sharp LCD plant currently under construction in west Japan.

"These will then be supplied to Sharp and Sony in quantities corresponding to their respective investments."

The development underlines that 2009 onwards will see large flat TV sets getting cheaper as competition intensifies. Many observers see the increasing collaboration on parts between the major players as an attempt to benefit from economies of scale and squeeze out smaller competitors before they get a firm foothold.