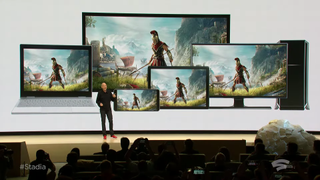 There have been a lot of promises made about game-streaming in the last month, but not a ton of information about worst-case scenarios. Something neither Microsoft's Project xCloud or Google Stadia have really talked about yet is what happens when you lose connection.

The good news, according to a Stadia spokesperson, is that the game instance will remain active for a few minutes. If your connection suddenly comes back, just restart the game you were playing and you should pop right back to where you were.

That's all well and good if your connection comes back right away, however, if you wait more than a few minutes Google will close the instance of the game you were running and you’ll be sent back to the last checkpoint the next time you play.

Taking a page from PlayStation Now

From the sounds of it, Google Stadia will work a lot like PlayStation Now – allowing you to reconnect if you get kicked off while holding your position in the game.

That said, if you’re playing something like Doom Eternal – a game that requires you to constantly be moving to avoid dying – your character might still die. Unfortunately Stadia isn't programmed to automatically try to preserve your health or take any commands without your input like pause or try and save.

According to the spokesperson, Stadia will do everything in its power to prevent a game from crashing – and will even drastically lower the graphics settings to keep you connected – but it can’t entirely prevent a dropped connection.

What remains to be seen is how frequent these drops are, something we’ll know a bit more about when we try the service in our own homes later this year.

Google Stadia is due out this November and can be purchased ahead of time with the $130 Founder’s Edition that includes a Chromecast Ultra, a limited-edition controller, a reserved Stadia username, a three-month Stadia Pro and a buddy pass that gives a friend three months of Stadia for free.